Demonstrators chanted "Prayuth Out" after the prime minister ignored a deadline set for his resignation. Parliament is also set to hold a special session to address the months of protests on Monday. 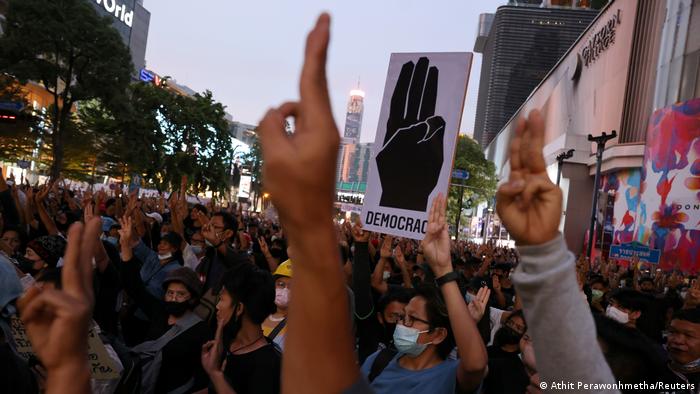 Thousands of pro-democracy protesters took to the streets of Bangkok again on Sunday, in the first demonstration since Prime Minister Prayuth Chan-ocha ignored the protesters’ deadline to resign.

The demonstration also marked the first major show of force since Prayuth lifted the October 15 emergency measures that had been put in place to stop three months of protests against the government and monarchy.

The rally took place in the heart of the capital's shopping district, which usually draws large weekend crowds. The demonstration was not as large as previous rallies, however, as another had already been called for Monday evening outside the German Embassy.

In addition to calling for the prime minister’s resignation, the protesters’ core demands include a more democratic constitution and reforms to the monarchy.

"If he doesn't resign, then we must come out to ask him to quit in a peaceful way," protest leader Jatupat "Pai" Boonpattararaksa said.

Prayuth has said the demands should be discussed in parliament, which is due to hold a special session on Monday and Tuesday. ''The only way to a lasting solution for all sides that is fair for those on the streets as well as for the many millions who choose not to go on the streets is to discuss and resolve these differences through the parliamentary process,'' he said last week.

However, critics have said it is unlikely that the protesters’ demands will be sufficiently addressed in a parliament filled with Prayuth’s supporters.

‘No use of force’

There was no sign of a major police presence around the demonstration at the Ratchaprasong Intersection — the same location where security forces initiated a bloody crackdown against protesters in 2010.

A government spokesman said there would be no use of force and called on demonstrators to remain peaceful.

A group of drag queens also gathered to put on a show. Later on, police at the site read out an announcement that the event violated a public gathering law and asked protesters to leave within an hour. However, the protest continued and officials did not make an immediate effort to break up the gathering.

At midnight, pro-democracy activists ended a two-day occupation outside Bangkok Remand Prison, where some of the main pro-democracy protest leaders were being held. Meanwhile, a pro-government counter-demonstration was held near the parliament on Sunday.

Protesters are due to gather outside the German Embassy on Monday, as the Thai king, Maha Vajiralongkorn — one of the world’s wealthiest monarchs — spends most of his time in Bavaria rather than in Bangkok.

Protesters have become increasingly openly critical of the monarchy, despite lese majeste laws that stipulate a prison sentence of up to 15 years for insulting or criticizing members of the royal family. However, criticism of the king has sparked a backlash among conservative royalists.

Self-proclaimed ''defenders of the monarchy'' mobilized last week online and in rallies in several cities, in many cases led by local civil servants. On Wednesday, a small royalist rally in Bangkok broke into violence when a few attendees attacked anti-government student activists.