Thai protesters return to the streets despite COVID concerns

Pro-democracy protesters rallied together calling for the resignation of Prime Minister Prayuth Chan-ocha and constitutional change. The demonstration took place despite surging COVID cases in the country. 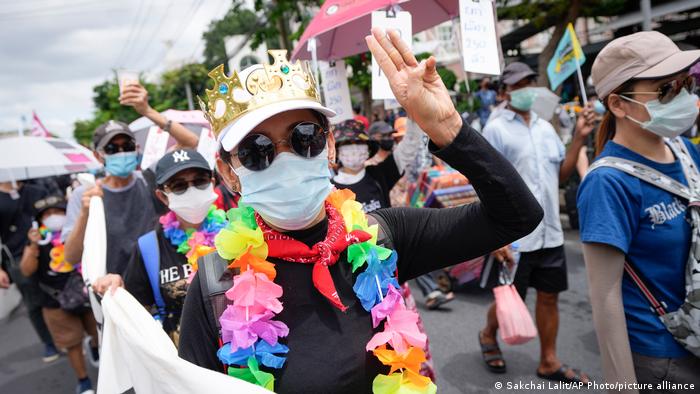 Despite pandemic restrictions, Thai pro-democracy protesters took to the streets again for the first time in months

Hundreds of people took to the streets in Bangkok on Thursday, protesting against Thailand's government and calling for change in the country.

The rally defied a ban on public gatherings as Thailand grapples with a third wave of infections — with around 3,000 new cases logged each day.

Thursday's protest comes on the anniversary of Thailand declaring an end to absolute monarchy on June 24, 1932.

'Constitution must come from the people'

Protest leader, Jatupat "Pai Daodin" Boonpattararaksa, said that in 89 years since the end of absolute monarchy, "we have not got anywhere."

"Our demands won't be lowered... The constitution must come from the people," he told the crowd.

The deputy head of Bangkok police Piya Tavichai said about 2,500 police officers had been deployed to maintain order in the Thai capital.

"A gathering at this time is not appropriate because it could lead to further spread of the virus."

Demonstrations on Thursday were also planned across the country, from the tourist city of Chiang Mai in the north to the southern province of Nakhon Si Thammarat.

In the second half of 2020, the country was rocked by youth-led protests against the prime minister's government, which took power in a 2014 coup when Prayuth was still a general. But the pro-democracy movement lost steam after virus outbreaks and the jailing of student leaders.

Calling for an end to royal defamation laws

The Thai pro-democracy movement is also calling for reform in how the monarchy operates.

Some demonstrators on Thursday held signs that read "Abolish 112," a reference to the kingdom's strict royal defamation laws. 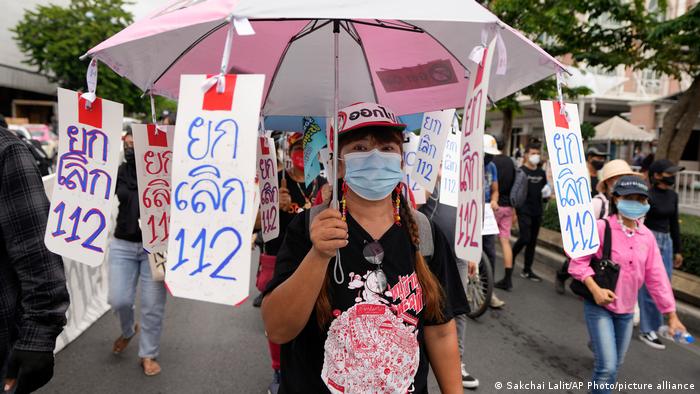 During mass protests last year, demonstrators broke traditional taboos by criticizing the king — risking prosecution under a law that makes insulting or defaming members of the royal family punishable by up to 15 years in prison.

Most of the protest leaders who were jailed have been released on bail, including student leader Parit "Penguin" Chiwarak, who faces royal defamation charges.

He joined Thursday's march in Bangkok wearing a plastic golden crown and carrying a flag.

Prayuth and his government have been heavily criticized for policies that have hindered the country's economic recovery plans.

The government's struggle to secure enough vaccine doses, as well as a vaccination strategy that involves a company owned by King Maha Vajiralongkorn have been particularly controversial.

Opposition is also growing among lawmakers against the prime minister — including two parties that are part of Prayuth's ruling coalition.

Efforts are currently underway in parliament to try and change the country's military-drafted constitution that helped keep him in office through elections in 2019.

The change would allow a junta-appointed Senate to vote for the prime minister.

It's unclear, however, whether the current efforts to change the country's power structures will be successful.