Teqball: How a young sport has rallied around Ukraine

When Russia invaded Ukraine, Ukraine's teqball players found themselves stranded abroad. Teqball is a young sport and the fledgling community has rallied around the Ukrainians who are determined to rebuild their country. 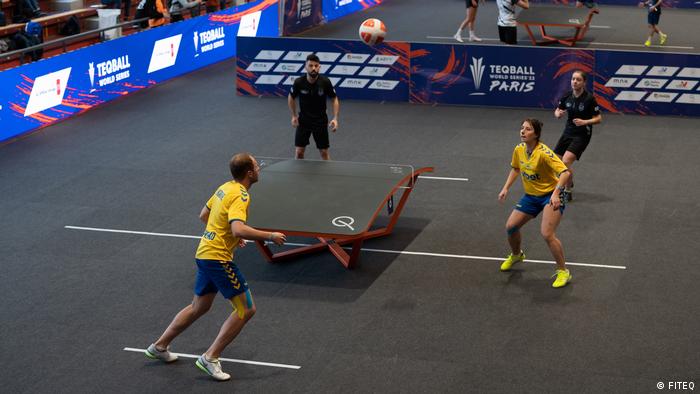 Despite everything, Oleg and Kateryna Usychenko consider themselves fortunate.

Oleg plays teqball, a sport invented in Hungary in 2012 that is best described as football-tennis played on a curved table-tennis table. He hadn't been due to represent Ukraine in Lisbon until February 25, but a lack of direct flights led him, his wife Kateryna and young daughter Iryna to leave Kyiv on February 23. The following night, the Russian invasion began.

"We were lucky," Kateryna told DW. "Maybe it was God. Maybe it was destiny. Something saved us."

The family suddenly found themselves stranded in Portugal with four days' worth of hand luggage and a small child. They couldn't go home, and neither could the rest of the Ukrainian team: Oleg's doubles partner Ivan Grom and women's pair Iryna Dubytska and Anastasiia Terekh.

"The first couple of days in Lisbon were surreal," recalled Ivan. "We couldn't really understand what was going on."

'They can count on Portugal and teqball'

But the young teqball community has pulled together. With the help of the Portuguese Teqball Federation (FTP), accommodation and other necessities were arranged for the Ukrainian team.

"We wanted to do what we could to help minimize their suffering," Rui Leitao of the FTP told DW. "We wanted to make them feel comfortable and at home in Portugal. They know they can always count on the Portuguese team and everyone in the teqball community." 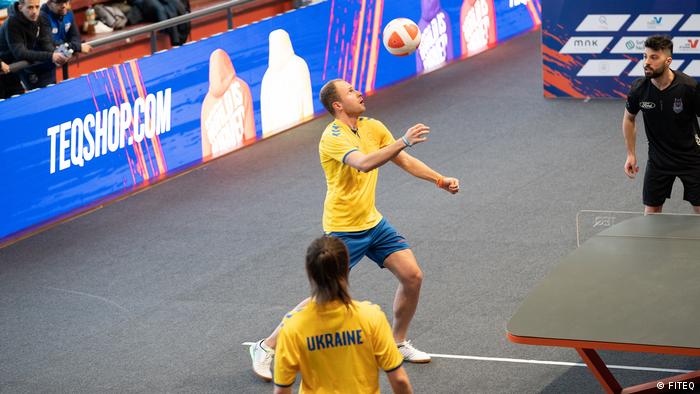 Three weeks later, as the Russian assault on their homeland intensified and the casualties continued to mount, the Ukrainians traveled to Paris for the inaugural Teqball World Series event. Their costs were covered by the International Teqball Federation (FITEQ), which also raised €2,000 ($2,200) for them by auctioning off a football shirt.

"We are supporting the Ukrainians logistically and financially with food, accommodation and travel, but also psychologically," said Jawal El Hajri, president of the French Teqball Federation (FNTEQ). "We want them to know that they are part of our family."

As luck would have it, Oleg and Ivan were drawn against Portugal in Paris, and beat Rui and his partner Joao Paulo Henriques 12-10, 12-6.

"Rui asked us to go easy on them," joked Oleg. "But when they were 8-4 up, we thought Rui had tricked us and decided that we'd better start playing seriously."

It was a lighthearted moment in a relationship that began in desperate circumstances, but which has grown to become a close friendship. And it was a moment in which, if only temporarily, Oleg and Ivan could forget the war at home.

"Teqball is a distraction for us," explained Oleg. "In Lisbon, it was hard to concentrate because it was just the third day of the war, but now we're used to it. As long as I know that my friends and family are safe, I don't feel anything. I'm not happy, I'm not sad, it is how it is."

'Teqball is a safe place for us'

Meanwhile, in the women's doubles, Iryna and Anastasiia couldn't have asked for a tougher start on their competitive debut as they were drawn against Brazil and teqball star Natalia Guitler.

"I know how difficult it is for them at the moment," Guitler told DW after a straightforward win (12-2, 12-2). "We all just hope that the situation improves so that the girls and their families can be safe, and they can practice more. Teqball is still a new sport so there is a lot of time to improve. I hope they all stay safe."

American star Carolyn Greco added: "It was nice to see everyone come together to applaud the Ukrainian players when their names were announced. The Teqball community really is a family."

Greco and her partner were knocked out in the semifinal by Hungarian pair Zsanett Janicsek and Lea Vasas, who would also go onto beat Guitler and her partner in the final. But for the Ukrainians, the event was about more than medals.

"The players and organizers have really supported us. They have helped with accommodation and everything we need, so we're very grateful," said Anastasiia. "Teqball is a nice distraction for us, but we can't concentrate fully, because our thoughts are always in Ukraine.

"Still, Teqball is a safe place for us." 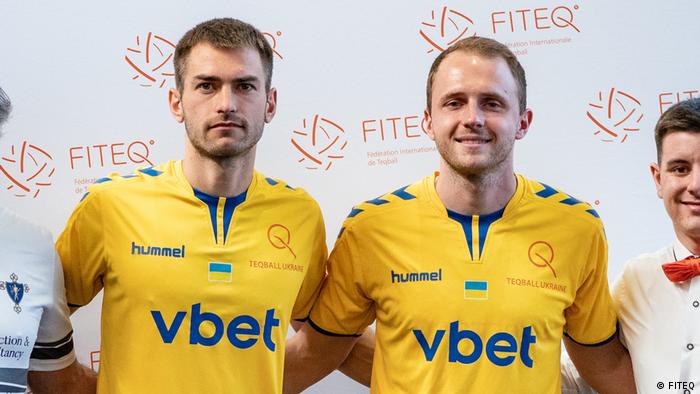 The attitude of the Ukrainian delegation in Paris was a mixture of gratitude, emotion and determined optimism that they will return home one day.

"When people find out we're from Ukraine, they ask if we need anything; clothes or food, it's incredible," said Kateryna Usychenko. "We don't actually need much. But just saying 'hello' feels the same as 'I love you' in this situation. We know we're not alone."

"Frankly, I've never felt more patriotic, I didn't know I loved my country so much," she said. "We're looking forward to rebuilding a brighter future. It will be a better Ukraine, a stronger Ukraine. The whole world knows how strong we are."

Until then, she will stay with Oleg, Ivan, Anastasiia and Iryna, and the fledgling Teqball community from Portugal to France and beyond will continue to rally around them.

"Life has to go on," said Ivan. "Our family and friends are following our matches and supporting us from home, and if we can make them happy and give them a distraction, that's great."

German Chancellor Olaf Scholz reiterated a plan to bolster defense spending while pledging to take on more refugees. "We are standing before a monumental challenge," he said.

Ukraine's president has accused Russian forces of "simply capturing" refugees trying to make their way out of the besieged city of Mariupol where 100,000 people remain trapped. Follow DW for the latest.