Tensions rise between Kabul and Islamabad | Asia| An in-depth look at news from across the continent | DW | 15.04.2013

Afghans have protested against the construction of a Pakistani military gate in an area Pakistan says belongs to its territory amid deteriorating Af-Pak relations. 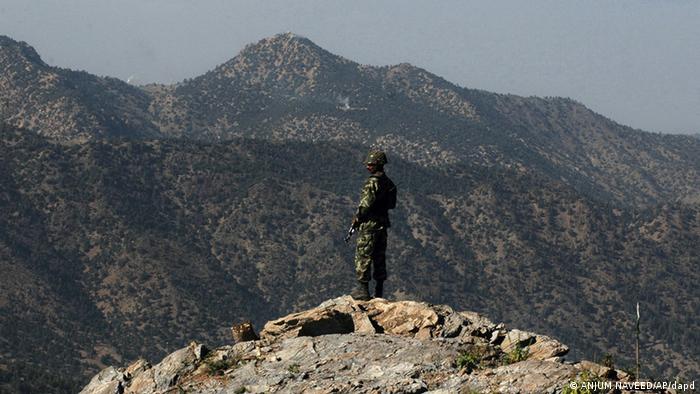 Afghan President Hamid Karzai ordered the removal of a military gate and similar installations built by Pakistan along the border. A defense ministry spokesman said they had been erected without coordination with Kabul. He added that Afghanistan had all the options to protect Afghan sovereignty.

The relationship between Afghanistan and Pakistan has always been rocky but it has once again deteriorated over differing approaches to the peace talks with the Taliban.

The situation, however, still looked good in November last year. Kabul and Islamabad had said they would support each other with regard to negotiations with the Taliban. However, this has changed and the Afghan foreign ministry recently announced it wanted to conduct the negotiations alone. 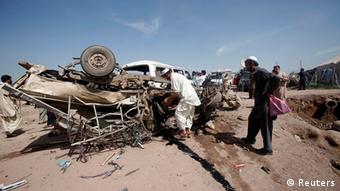 Bomb attacks are frequent on either side of the border

Foreign Ministry spokesman Janan Musazai accused Islamabad of sabotaging the peace talks and only being interested in furthering its influence in Afghanistan.

Jochen Hippler from the Institute for Development and Peace (INEF) at the University Duisburg-Essen said this was a "bitter setback:"

Pakistan accuses Afghanistan of allowing the Afghan Taliban to cross the border into Pakistan. Afghanistan, in return, says Pakistan has been engaged in cross-border firing. Pakistan, however, says that troops have reacted to stop "intrusions" from the Afghan side but that there has been no "artillery shelling" at all.

Afghanistan has repeatedly said that Pakistan is a Taliban breeding ground and reproaches the Pakistani secret services for supporting the Taliban, especially when Benazir Bhutto was in power, to destabilize Afghanistan.

The porous 2,500-kilometer border is a headache for both countries. The Durand Line was established in 1893 after a meeting between Afghan ruler Abdur Rahman Khan and the Foreign Minister of British India Sir Henry Mortimer Durand. It cut through traditional Pashtun tribal areas, dividing ethnic Pashtuns and Balochs who live on either side of the border. Afghanistan today does not recognize the border.

"The lack of trust means that small events can trigger great tensions," says Pakistani journalist Rahimullah Yusufzai. "And there is a tendency to make mutual accusations." 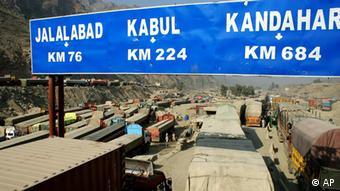 The Afghan-Pakistani border has sometimes been closed to international convoys

Moreover, relations have not been helped by the fact that Pakistan was the only country with Saudi Arabia and the United Arab Emirates to recognize Afghanistan's Taliban government in 1996. Pakistan only distanced itself after the 911 terrorist attacks on the US after massive pressure from Washington. Nonetheless, the Afghan Taliban leadership is believed to be based in the Pakistani city of Quetta.

No straight road to peace

The Afghan government had thus wanted Pakistan to be an active participant in peace negotiations with the Taliban after international troops withdraw from the region in 2014. However, Kabul disagrees with the conditions Pakistan is setting.

"Pakistan insists on Afghanistan signing a strategic agreement with Pakistan stating what will happen after 2014," explained Masood Akhtar, a former Pakistani officer and expert on international relations. "This would include a clause saying India will not have any influence over Afghanistan and that the Afghan army will be trained in Pakistan rather than in India as planned."

Pakistan is particularly worried that India will gain more influence in Afghanistan alongside other foreign powers such as China and Russia. India and Afghanistan already signed a strategic agreement in 2011. "It could well be that after the withdrawal, India's role in Afghanistan will be strengthened and that would be seen with great distrust in Pakistan," said Jochen Hippler. 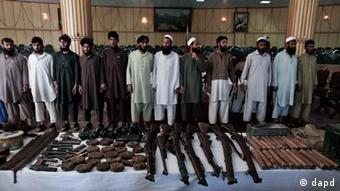 Pakistan is alleged to be a breeding ground for Taliban militants

But Yusufzai has some hope. "Pakistan and Afghanistan are neighbors - they have to cooperate with one another." He adds that there is still time until 2014 for relations to improve. "They will have to reach clear agreements for particular points of conflict and they need a roadmap towards peace."

However, he does admit that time will be needed and points out that not even the US has a roadmap. The US had looked at India as a potential successor to overtake responsibility for Afghanistan but this would be a bitter pill for Pakistan to swallow.

Most experts agree that if India and Pakistan cannot sort out their differences over Afghanistan, Pakistan will continue to instrumentalize the Taliban and use its relationship with them as a means of pressure, thus torpedoing any peace process if it wants.

The chief of Pakistan's right-wing Jamaat-e-Islami party Munawar Hasan told DW 'nobody knows the Taliban better than Pakistan' and that if his party succeeded in upcoming election, it would make peace with the militants. (11.04.2013)

Pakistan has released four Afghan Taliban prisoners, including a former justice minister, the government has said. The move comes as a signal that Pakistan is committed to seeking peace with neighboring Afghanistan. (31.12.2012)