The chief of Pakistan's right-wing Jamaat-e-Islami party Munawar Hasan told DW 'nobody knows the Taliban better than Pakistan' and that if his party succeeded in upcoming election, it would make peace with the militants. 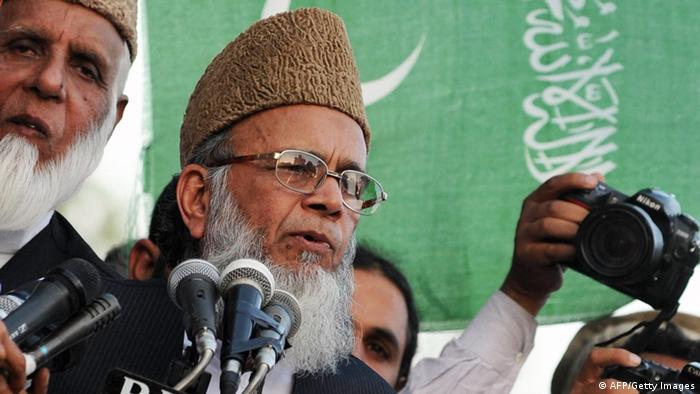 Syed Munawar Hasan is head of one of Pakistan's oldest and biggest Islamic parties, Jamaat-e-Islami. As Pakistan gears up for parliamentary elections on May 11, Jamaat-e-Islami is trying to get into electoral alliances with Islamic and right-to-the-center political parties. Jamaat-e-Islami, which never performed well in any of Pakistani elections except in 2002 when it was part of a right-wing alliance - the Muttahida Majlis-e-Amal (MMA) - which won the highest number of seats in then North-West Frontier Province's (now Khyber Pakhtunkhwa) provincial assembly. Jamaat-e-Islami is against the US' involvement in Pakistani politics and wants a theocratic government in the country. Sympathetic towards the Taliban and al Qaeda, Hasan's party believes in pan-Islamism - an ideology that calls for the political unity of all Islamic states.

DW: What are the chances of your party's success in upcoming general elections?

Munawar Hasan: It is too early to predict. It depends on our election campaigning and electoral alliances with other parties.

If Jamaat-e-Islami is successful in the elections, what are your goals for foreign policy, particularly regarding Afghanistan and the Taliban?

With the support of parliament, we will formulate a new and independent foreign policy. Our foreign policy will not be dictated by the US. We will raise our voices for the Muslims in Myanmar, Afghanistan, Kashmir, Palestine and Chechnya and try to resolve disputes in these countries with the help of the international community. As far as the Taliban are concerned, we will negotiate with them without US involvement. Nobody knows the Taliban better than Pakistan, and only Pakistan can force them to give up their armed struggle. Taliban rejected all those who tried to negotiate with them in Qatar and France at the behest of the US.

If you come to power, will you be able to fulfill your international obligations?

Pakistan is a very important country for the world. The world cannot ignore Pakistan because of its strategic significance and its links with Afghanistan, China, Iran and Central Asian states. At the moment, the US is too involved in Pakistan's domestic affairs. We will change that. We will give priority to our national interests and I hope the international community will understand our point.

Your party has been in Pakistani politics for a very long time. Why has it not been successful like the religious parties of Turkey and Egypt?

It is true that we have not been very successful on the political front but we have achieved a lot in terms of safeguarding Islamic values in the country. Pakistan's conditions are different from those in Turkey and Egypt. But we will continue with our struggle to get there.

How do you look at former military chief and President Pervez Musharraf's return to Pakistan from exile? Do you see a political future for him in Pakistan?

Musharraf has risked his life by coming back to Pakistan and I do not think he returned just to win one seat in parliament. I think he is on an "assignment" in Pakistan. He has been brought back by the forces that see a role for him in politics.

Do you expect the elections to be free and fair?

You can't rule out the possibility of rigging but we are satisfied with the statements of the army chief, the chief justice and the heads of the caretaker government. We will be carefully monitoring the election process though.

Is it possible that elections will be postponed?

Yes. Even President Zardari's aide Raza Rabbani is apprehensive about the elections and has said that some people do not want elections to be held on time. The political situation in Balochistan is worrying as the nationalists there are being forced to boycott elections.

Social networking websites such as Facebook and Twitter have become popular instruments for Pakistani political parties in their election campaigns, but experts say they cannot guarantee success. (10.04.2013)

Are you religious enough to contest elections?

Pakistan's Election Commission has rejected the nomination of Pervez Musharraf for elections under articles 62 and 63 of the constitution, which state that only 'pious' and 'law-abiding' Muslims can hold office. (05.04.2013)

As Pakistan gears up for parliamentary elections, Zohra Yusuf of the Human Rights Commission of Pakistan talks to DW about the threats posed by Taliban militants, and evaluates President Zardari's PPP's time in power. (25.03.2013)