After Ukrainian forces liberated a few cities, pro-Russian separatists have now entrenched themselves in Donetsk. The civilian population there is tired of warfare, and ready for a peaceful solution. 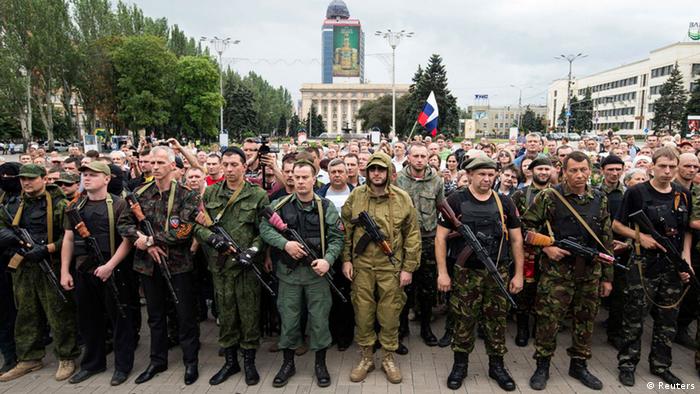 Donetsk has apparently turned into a garrison. Within only one day, armed men in camouflage fatigues occupied the metropolis in the industrialized zone of eastern Ukraine. Stitched on their uniforms is the badge of the "People's Republic of Donetsk," an entity proclaimed by pro-Russian separatists. Now these young men are ranging across the city with guns in their hands, topping off their prepaid mobiles at service stations, taking care of bank business, or buying razor blades and socks in local shops.

The civilian population of Donetsk has been calm and reserved. And quite a few people are leaving the city ever since the fighters of the "People's Republic," beaten in other cities by Ukrainian forces, have retreated to Donetsk.

According to social media reports, pro-Russian separatists have occupied student dormitories that are usually empty during the summer. The authorities, claiming that the situation is tense but stable, have advised people to avoid conflicts with the separatists, and to stay away from locations where the armed men are gathering. 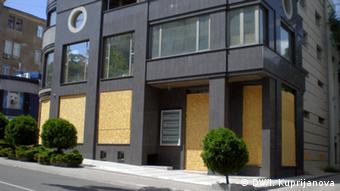 Many shops and offices in downtown Donetsk have been closed

One of these dangerous locations is the regional branch of the Ukrainian security service SBU. The separatists have turned the building into a fortress.

"The separatists have been around for quite some time, it's basically their headquarters. But by now, entire hordes of them are assembled there," reported Lyudmila, who lives close by, to DW. Other buildings in the surrounding area have also been occupied, she said: "Now a lot of cars are parked that weren't there before." Lyudmila suspects that the separatists, withdrawing from the city of Slovyansk, stole these cars from the local population in order to flee to Donetsk.

Lyudmila works as a teacher at a school located next door to the SBU building. She is worried that should fighting erupt there, her school could be affected. "If the school is bombed, where then am I supposed to work?" she lamented. 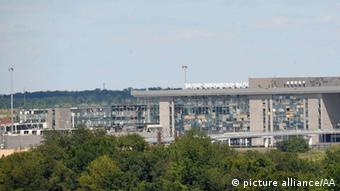 Heavy fighting has been reported around the Donetsk airport

How likely is it that Donetsk will be shelled? That's the big question that many of the city's inhabitants are asking themselves these days. Explosions can be heard at night; heavy fighting is raging around the nearby airport and the village of Karlivka. "When the Ukrainian forces shoot, the earth trembles and the fields burn," reported farmer Andrei. His Karlivka farm has also been hit.

Andrei blames former Ukrainian President Viktor Yanukovych for the present turmoil. But he also accuses the oligarchs of instigating aggressions among the people to serve their own interests.

As the separatists entrench themselves in Donetsk, Andrei all but rules out any prospect of peace for the near future. "The Ukrainian forces will attack them right in the middle of the city. These battles could become even more bloody and destructive than those in smaller towns," the farmer said worriedly.

Fear is in the air everywhere, and tensions are on the rise. Many shops and offices have been closed or barricaded, and numerous people are working at home.

The governor of the region, Sergei Taruta, who has moved with his staff to the seaside city of Mariupol, hopes that Donetsk will be spared further fighting. "The separatists have not yet left our territory, they have only switched location," Taruta was quoted saying in the Ukrainian media.

Taruta is counting on negotiations that would ultimately have the separatists leave the country peacefully. Meanwhile, the commander of the Ukrainian national guard, Stepan Poltorak, stated on Ukrainian television that there were no plans to shell Donetsk.

Russian-Ukrainian designer Inna Thomas resorts to fashion to try to end the hostility between the two countries. Her new collection presented during Berlin's Fashion Week is intended as a contribution to peace. (09.07.2014)

Ukraine's defense ministry has said it will not negotiate a new ceasefire with pro-Russian separatists until the rebels have laid down their arms. The Ukrainian military has recently retaken key rebel strongholds. (08.07.2014)