Tens of thousands of Christians celebrate Christmas in the Holy Land

Christians from around the world have assembled in the West Bank town of Bethlehem to celebrate Christmas. There are thought to be fewer than in past years due to the Gaza conflict of this past summer. 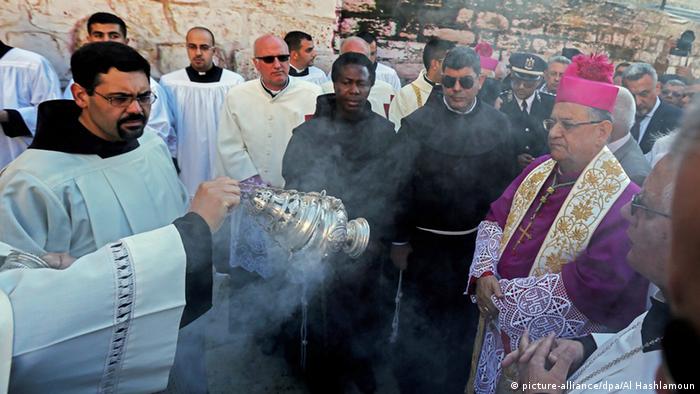 The highest-ranking Roman Catholic official in the Holy Land, Latin Patriarch Fouad Twal (pictured above, right), led a procession from the Old City of Jerusalem to the biblical town of Bethlehem on Wednesday, making most of the journey in a motorcade before entering Manger Square on foot.

Thousands of people packed the Square, where marching bands entertained the visitors. Many stopped to admire a giant Christmas tree in the Square, which was decorated with ornaments in red black and silver, representing the colors of the Palestinian flag.

According to Israel's tourism industry, around 70,000 tourists, many of whom are Christian pilgrims are expected to visit the Holy Land over the Christmas holiday period. This is fewer than in previous years. The July-August conflict in the Gaza Strip, which killed around 2,200 people, mostly Palestinians, is seen as a contributing factor.

Earlier, Latin Patriarch Fouad Twal referred to the conflict as he delivered a Christmas message from Jerusalem, in which he decried "an intensification of violence... the devastating war and accompanying bloodshed in Gaza being the most shattering of all." He also expressed the hope that 2015 would be better than "this difficult year.

Palestinian President Mahmoud Abbas sent his own Christmas message late on Tueday, expressing support for minority Christians, who make up just two percent of the population in Israel and the West Bank and 0.1 percent in the Gaza.

"Christians in Palestine are not a minority, but an integral part of our nation," said Abbas who, like most Palestinians, is a Sunni Muslim.

Abbas also spoke about his own Christmas wish list.

"This Christmas we deliver a very special message to the world: All I want for Christmas is justice," he said, referring to a diplomatic push by Palestinians at the United Nations to get Israel to withdraw from the occupied territories.

Later, the Latin patriarch is to celebrate midnight mass in the Church of the Nativity, thought to mark the site where Jesus was born. Thousands of Christians were also attending festivities in Jerusalem and Nazareth.