Tens of thousands of Australians have rallied in support of same-sex marriage ahead of a postal vote on the issue. Polls show that most are likely to vote in favor, meaning the issue will be debated in parliament. 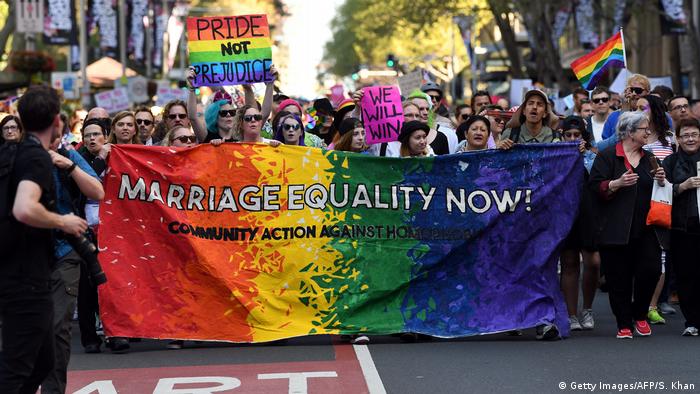 The largest gay rights rally in Australian history was held in the eastern city of Sydney on Sunday, demanding legalization of same-sex marriage, as political leaders urged voters to back the issue in a postal survey that starts on Tuesday.

The march comes as all 16 million registered voters are to be sent a postal vote starting on Tuesday asking the question: "Should the law be changed to allow same-sex couples to marry?"

Voters will check "yes" or "no," and if the former predominates, parliament will debate legalizing same-sex marriage before Christmas. The results of the postal vote will be announced on November 15. 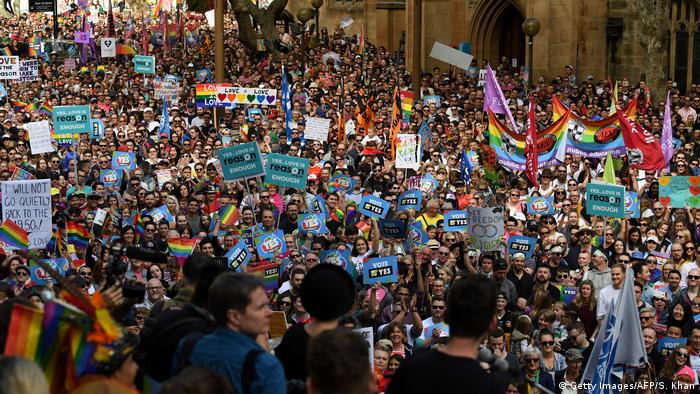 Before the rally, Prime Minister Malcolm Turnbull threw his support behind the "yes" vote, telling members of the Liberal and National parties to "be honest with each other" that gay marriage was not a threat to traditional marriages.

"I am utterly unpersuaded by the proposition that my marriage to Lucy, 38 years long next March, or indeed any marriage, is undermined by two gay men or two gay women setting up house down the road, whether it is called a marriage or not," ABC News reported Turnbull as saying.

The prime minister also reminded supporters that same-sex marriage has already been approved in 23 countries.

"In any one of those nations, has the sky fallen in? Has life as we know it come to a halt? Has traditional marriage as we know it been undermined? The answer is no," he said.

Turnbull has said before that he supports same-sex marriage, but had not signaled he would publically campaign for a "yes" vote. 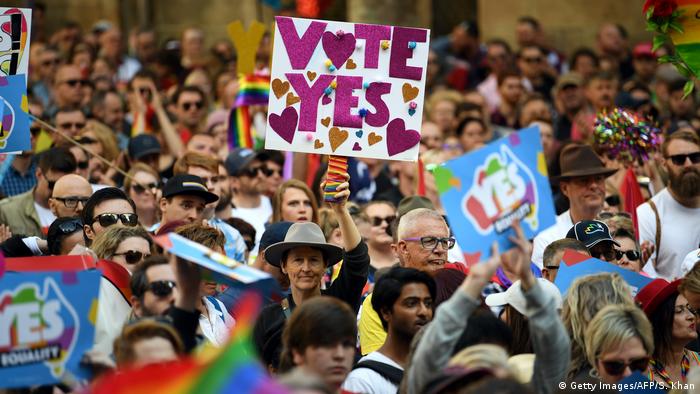 A majority of voters support a "yes" vote.

The results of the postal vote are not binding on members of parliament, who can still vote against the measure when it comes up for debate.

According to a recent poll, nearly 58 percent of those surveyed said they would back same-sex marriage, while about 31 percent were against and 10 percent still undecided. The poll showed that 65 percent of voters are likely to participate in the postal vote.

The postal vote has prompted criticism from some who argue it is a waste of money and parliament should just vote on the issue. A majority of lawmakers support same-sex marriage.

Calling the planned postal vote on gay marriage "demeaning," gay rights activists have gone to court in a bid to have parliament decide the issue. Most Australians want same-sex marriage legalized, according to polls. (05.09.2017)

Same-sex marriage in Germany: An issue for the court?

Germany has legalized same-sex marriage through a parliamentary vote. But in Angela Merkel’s CDU/CSU party in particular, many are criticizing the amendment as unconstitutional. How likely is it to end up in court? (03.07.2017)