The president of Taiwan has warned Beijing against using "threats and intimidation" to isolate the self-ruled island. Relations have soured since the Taiwanese government refused to recognize the "One China" policy. 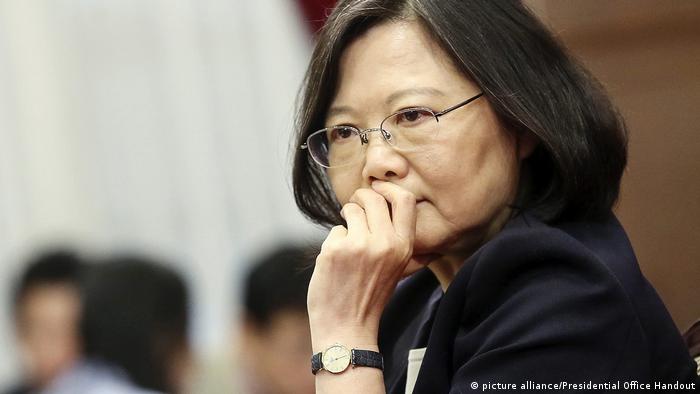 Trump's unprecedented call with Taiwan's leader and his subsequent tweets caused a lot of friction in Beijing. China and Taiwan are waiting to see what policy will take shape after he takes office.

The small African nation in the Atlantic Ocean has embraced Beijing after suffering a series of economic setbacks. Taiwan, a former Sao Tome ally, has accused China of practicing "dollar diplomacy." (26.12.2016)

China questions future of US relationship after Trump's Taiwan remarks

China has said a "stable" relationship with the US would be "out of the question" if Washington stops honoring the One-China policy. The warning follows Donald Trump's latest remarks concerning relations with Taiwan. (12.12.2016)

Taiwan's President Tsai Ing-wen on Saturday said Taipei will not succumb to pressure from China, calling on Beijing to engage in "calm and rational" dialogue aimed at maintaining peace during a year-end news conference.

Tensions have risen between mainland China and Taiwan since Beijing suspended official communications with Taipei in June after Tsai's administration refused to endorse the "One China" policy.

"Beijing authorities are returning to their old ways of isolating and suppressing Taiwan, and even of threats and intimidation," Tsai said.

"We will not yield to the pressure nor go back to the old ways of confrontation," the Taiwanese president added.

Relations between mainland China and Taiwan were strained earlier this month, when US President-elect Donald Trump dismissed decades of American diplomatic protocol and accepted a call from Tsai.

Since the phone call, China has launched military drills near Taiwan, which it considers a breakaway province. At least one aircraft carrier and five other warships passed by the self-ruled island earlier this month.

"As long as we can be calm, rational and maintain a flexible attitude, I believe we should be able to find a solution that allows both sides to maintain peaceful and stable relations," Tsai said.

Meanwhile, Beijing has urged Washington to prevent Tsai from entering American airspace during her upcoming visit to diplomatic allies in Central America. She is scheduled to make stops in Houston and San Francisco. It is unclear whether she will meet with Trump's transition team during the stopover.

China has sought to isolate Taiwan internationally since the Chinese civil war of the 20th century effectively resulted in two de facto states: the People's Republic of China and the Republic of China based in Taiwan.

Taiwan has formal diplomatic ties to only 21 states after the small African nation of Sao Tome and Principe cut ties earlier this month in favor of China.

US senator meets Taiwanese president as tensions with China rise 26.08.2022