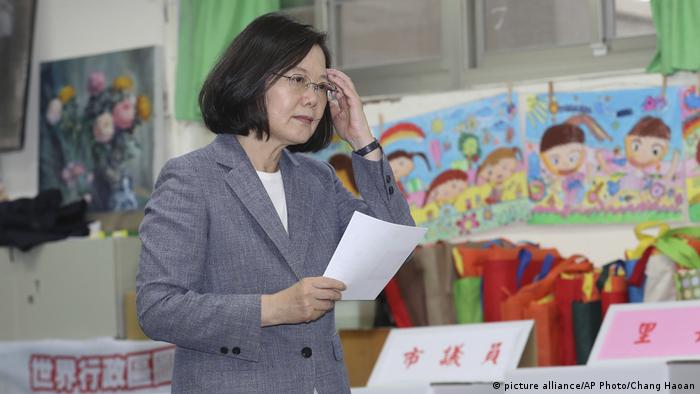 Taiwan's ruling party lost two mayoral elections to the Nationalist Party on Saturday in polls seen as a popularity test for President Tsai Ing-wen (top photo), who has led calls for the country's full independence as China exerts more economic and political pressure on the island.

Tsai's Democratic Progressive Party (DPP) lost both in the southern port city of Kaohsiung, where it had held power for 20 years, and in the central city of Taichung.

After the defeats, the president said she would step down as party leader.

"As chairperson of the ruling party, I will take complete responsibility for the outcome of today's local elections," she told reporters. She said she had rejected the resignation of her premier, William Lai, who had offered to quit earlier in the evening.

Saturday's defeats have dealt a major blow to Tsai's prospects of re-election.

The Nationalists, also known as Kuomintang, had campaigned on a pro-business platform, while also advocating a more conciliatory line toward Beijing.

China said the results reflected "the strong will of the public" for closer Taiwan-Chinese relations.

Voters also cast ballots in referendums on issues ranging from gay rights to the island's volatile relationship with China.

Ahead of the election, Tsai accused China of trying to interfere by engaging in "political bullying" and "fake news." Beijing, which has never given up its claim to Taiwan, denied the allegations.

A proposal to change the country's name at international sports events from Chinese Taipei to Taiwan, a move Beijing opposed, was defeated with 5.7 million votes against and only 4.7 million in favor.

Relations between the two countries deteriorated after Tsai's pro-independence party entered office in 2016. China recently conducted military drills around the island and tried to convince Taiwan's diplomatic allies to abandon it.

Another referendum on the ballot, the proposal to legally recognize marriage as between a man and a woman, received 6 million votes, double the support for another backing equal marriage rights.

The referendums came ahead of a Supreme Court deadline for introducing marriage equality legislation by mid-2019. Tsai campaigned on a pro-marriage-equality agenda in 2016.

The government has made it clear that the results of the referendum will have no consequences for the court's decision to legalize gay marriage.

More than 11,000 seats were up for grabs in municipalities, counties, townships and villages across the country.

But the election took place amid a backlash against Tsai's attempts to overhaul the country's pension scheme and labor law. Other critics have denounced the government for failing to cut a budget deficit and reduce pollution.

With massive crowds gathering for a gay pride parade in Taiwan, activists have called on the government to provide them with marriage rights. Christian pastors, foreign tourists and diplomats all showed their support. (27.10.2018)