Flags have been lowered to half-mast as the island mourns the loss of at least 50 lives after Friday's rail disaster. Officials have said an errant truck was responsible for derailing the train.

At least 50 people have died following Friday's crash near the eastern coastal city of Hualien. With rescuers anticipating the discovery of more bodies inside the wreckage, officials have suggested the death toll may still rise.

By Saturday morning, flags were seen flying at half-mast across Taiwan and they were set to stay that way for the next three days. 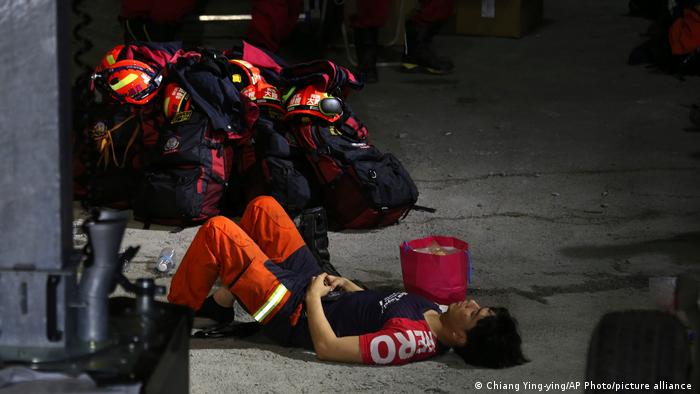 The train was packed at the start of a long holiday weekend — with 492 passengers and four crew on board.

Just moments before the collision, which occurred at around 9:30 a.m. local time (0030 GMT), a parked railway maintenance vehicle slipped down an embankment and onto the track, according to the Taiwan Railways Administration (TRA).

As it approached a narrow tunnel, the train hit the errant truck that lay in its path, derailing many of the carriages as the devastation unfolded.

Some railway experts have suggested the narrowness of the tunnel made the crash even worse, and rescue efforts more difficult.

Prosecutors said they are seeking an arrest warrant for the construction site manager who may have failed to secure the parking break, state-run Central News Agency reported on Saturday.

Investigators began questioning the man late on Friday but had to stop their interrogation when he became too emotional, the agency reported.

For the time being, he has been released on bail and is barred from leaving Taiwan, pending further investigation.

US military commanders have warned about the imminent threat of Beijing trying to recover control over the democratic island. But some experts say greater danger lies with China's inconspicuous "gray zone tactics."

Two passenger trains have crashed into each other leaving at least 19 dead and almost 200 injured. On Saturday, the Health Ministry revised down the initial death toll of 32.

Only two days after his prison release, activist Andy Li has been charged with foreign collusion under Beijing's sweeping security legislation. Li and 11 other activists had tried to escape to Taiwan.