Two passenger trains have crashed into each other leaving at least 19 dead and almost 200 injured. On Saturday, the Health Ministry revised down the initial death toll of 32. 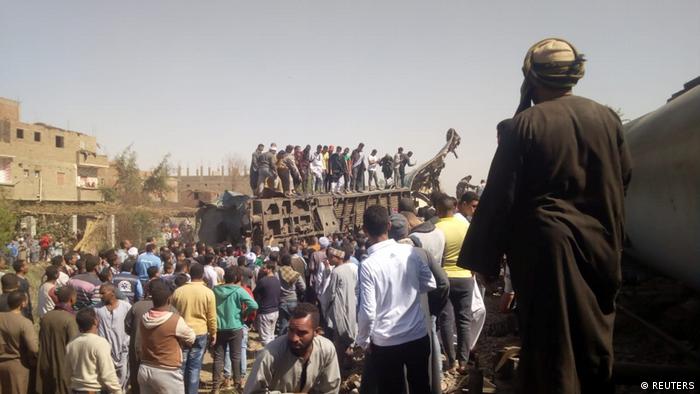 A collision between two passenger trains in central Egypt on Friday left at least 19 people dead and 185 injured, the Egyptian Health Ministry said.

Health Minister Hala Zayed told reporters on Saturday that an initial toll of 32 killed in the crash was revised down, while the number of injured rose from 165.

"After we honed in on the details of those killed and injured... at this moment there are 185 injured and 19 corpses," Zayed said.

Three passenger cars were flipped over in the collision. Videos from the scene depicted people still trapped inside.

Dozens of ambulances raced to the scene of the crash in the Tahta district of Sohag province, around 460 kilometers (285 miles) south of the capital, Cairo.

Egypt's railway authority said the accident was caused by an unknown individual applying the emergency brakes in the first train, which was subsequently hit by the train behind, causing two carriages to derail.

"The trains collided while going at not very high speeds, which led to the destruction of two carriages and a third to overturn," a security source told Reuters.

"The [railway] service has been neglected for decades to an extent that made it quite outdated and extremely dangerous," Egyptian Prime Minister Mustafa Madbouly told reporters after he arrived to the scene.

"We have spent billions to upgrade the railway but we still have a long way to go in order to complete all the required work.''

One of those accidents left 43 people dead when two trains collided near the Mediterranean port city of Alexandria.

More than 300 people were killed in Egypt's deadliest train accident when a speeding train caught fire in 2003.

Egypt has one of the oldest and largest railway networks in Africa.

Two road accidents in Egypt killed several textile factory workers and tourists and injured over 30 others. Local media reported that tourists from India and Malaysia were among those killed.