Taipei said it aims to build a "resilient defense" to cope with rising military threats made by China. The threats reportedly include overflights of Taiwanese airspace and cyber warfare. 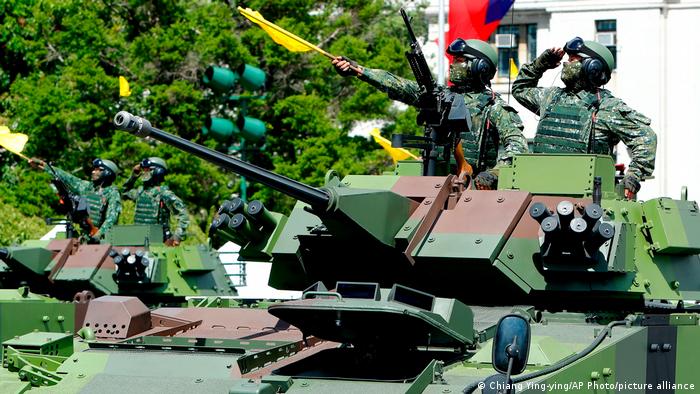 Taiwan says that China has been rapidly building its military capabilities

Taiwan on Tuesday said that China is seeking to take control of the island by wearing down its military capabilities and influencing public opinion.

Beijing is employing "gray zone" tactics to increase pressure on the Taiwanese military, the Defense Ministry said in its biennial report.

China claims the self-governing island republic as its own territory.

In a preface to the 200-page report, Defense Minister Chiu Kuo-cheng said that the People's Republic of China (PRC) has not renounced the option of the use of force against Taiwan.

Chiu added that Beijing was rapidly building up military capabilities as the world was preoccupied with dealing with the pandemic. He said there was a "grave threat" to security in the Taiwan Strait.

What Taiwan has said about its national defense

In response, Taiwan said it aims to build a "resilient defense" to cope with rising "gray area" threats by China, ranging from overflights of Taiwanese air space to cyber warfare, according to the defense report.

Taipei aims to build Taiwan's armed forces into "a multifunctional, mobile, and swift fighting force and build a robust and resilient national defense" to deter Beijing from waging war.

Chiu also cited efforts to realize "self-reliant defence" including the rollout of an advanced jet trainer and the activation of the building phase of its "indigenous defensive submarine" program.

The report disclosed that 554 incursions by various types of aircraft of the "Communist Chinese" air force, including fighter aircraft, had trespassed over Taiwan's air defence identification zone (ADIZ) from September 2020 through August 2021.

China has been issuing more threats to use force against Taiwan by holding military exercises and sending planes close to the island.

China and Taiwan separated during a civil war in 1949. While the US cut formal diplomatic relations with Taipei in 1979 in order to recognize Beijing, Washington is committed by law to ensure the island can defend itself and to treat all threats toward it as matters of grave concern.

While Taiwan relies on the US for much of its military capabilities, President Tsai Ing-wen has been pushing for a revitalization of its domestic defense industry, including the production of conventionally powered submarines.