What began with largely peaceful protests against Syrian President al-Assad in March 2011 developed into a full-scale civil war. Read DW's coverage of the conflict in Syria. 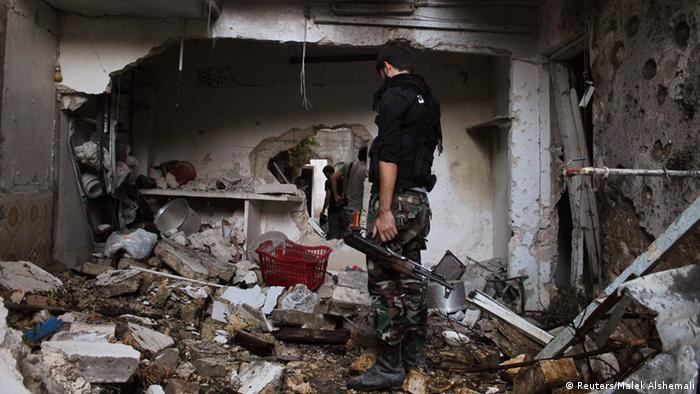 What began with largely peaceful protests against Syrian President Bashar al-Assad in March 2011 has developed into a full-scale civil war. Assad's regime is violently crushing any opposition to his family's four-decade-long stranglehold on power. Government forces and rebel groups are engaging in violent battles across the country.

The ongoing conflict has devastated Syria. The United Nations estimates that as many as 100,000 people have died so far in the conflict. Some 7 million people are in dire need of humanitarian assistance and over 1.9 million refugees have fled the violence to neighboring countries, North Africa and Europe.

Outside of Syria, Russian and US diplomats agreed to a deal that could eventually lead to the destruction of Syrian chemical weapons and averted a military intervention in Syria by the United States. But many questions remain about the deal and whether international leaders will stick to it.

DW looks at the effects of the conflict on Syria and the region.

Refugees know gratitude and relief in a way others don't. But when reaching safety, joy is not always the overriding emotion. DW met one of Germany's newest Syrian refugee families to learn more. (27.09.2013)

Al Qaeda and its affiliates are forcing Syrians to flee to neighboring countries such as Turkey. Many of the refugees have harrowing stories to tell of how they escaped the clutches of the militant brigades. (20.09.2013)

A hospital in northern Israel is treating victims of the Syrian war. The cross-border operation is risky - both countries are officially in a state of war. (19.09.2013)

Russia wants Syria to join the Organization for the Prohibition of Chemical Weapons (OPCW). So far, the organization has barely been mentioned in connection with the UN inspections in Syria. That may now change. (10.09.2013)

Chemical weapons come in gas or liquid form. They are produced with the express purpose of injuring or killing people. Syria is thought to have access to several types of these weapons of mass destruction. (26.08.2013)

As the Syrian conflict rages on, international legal experts are already discussing how to punish those responsible for the war crimes being committed by both sides. It's a question world leaders are hoping to delay. (04.10.2013)

The fighting in Syria continues. For many people there the war has become part of an everyday routine, and some manage to lead a surprisingly normal life - but terrible suffering is often just a street away. (14.09.2013)

Germany's domestic security agency has recorded what experts regard as an alarming trend. A growing number of young Germans are traveling to Syria to aid the opposition, potentially getting radicalized along the way. (08.09.2013)

After years of gridlock, the US and Russia pushed together for a UN Security Council resolution to scrap Syria's chemical arsenal. Syria expert Joshua Landis tells DW why diplomacy is the best option. (27.09.2013)

The United States and Russia have agreed on a plan to destroy all of Syria's chemical weapons. But there are still many open questions, including whether world leaders will all stick to their words. (15.09.2013)

The Russian initiative has opened a window for diplomacy in the Syria conflict. The Kremlin has made itself a player again - but is yet to actually offer a new policy on Assad. (13.09.2013)

As the UN comes closer to reaching a resolution on Syria to give up its chemical weapons, DW asks five Syrians how, if at all, the international community can help bring the conflict to a close. (27.09.2013)

The Arab Spring inspired many to take to the streets. But for some opponents of the Syrian government this proved to be deadly, as the regime imprisoned, tortured and killed many citizens. A survivor tells his story. (18.09.2013)

Former UN arms inspector Rolf Ekéus tells DW why it's unlikely that the expected UN report on the use of chemical weapons in Syria will include a smoking gun and why the world must act to get rid of Assad's arsenal. (12.09.2013)

'Everybody wins' in chemical weapons deal

A young woman in Syria tries to make a difference

Millions of Syrian children are on the run

Burkina Faso: Why citizens are disenchanted with their president