Thousands of Syrian refugees have crossed into Lebanon, fleeing a major government offensive in the Qalamoun mountains. Meanwhile, Syrian rebels have blown up a government building, killing dozens of soldiers. 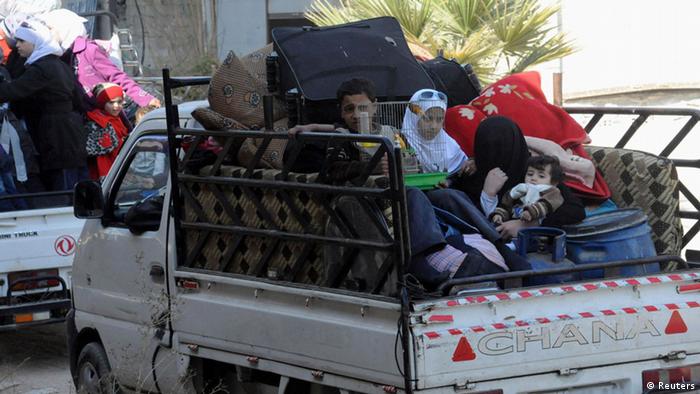 Lebanese authorities struggled to cope with the flow Syrian refugees over the weekend, with at least 1,700 families arriving in the border town of Arsal since Friday.

Many of them have taken refuge in tin shacks, with the UN refugee agency providing plastic to reinforce the makeshift shelters against the cold. Aid workers were also distributing blankets, mattresses, food, diapers and hygiene kits.

Most of the families had fled the town of Qara, which has been the focal point of a Syrian government offensive in the Qalamoun mountains. Syrian warplanes and artillery have pounded the strategically important location, which lies on a road that connects the capital Damascus to the central city of Homs.

Syrian President Bashar Al-Assad's regime has made headway against the disparate rebel groups in recent months, capturing several suburbs south of Damascus and taking two towns and a military base outside the northern city of Aleppo. A victory in the Qalamoun mountains would deal a major blow to the rebels, cutting off the flow of supplies from Lebanon to opposition-held neighborhoods in Damascus.

Lebanon has taken in 800,000 registered refugees since the Syrian civil war broke out in 2011. The refugee influx has strained the country's resources and stoked its own sectarian tensions.

In Damascus, meanwhile, a bomb blast destroyed a government building, killing at least 31 soldiers. A general and two brigadiers were among the dead, according to the Britain-based Syrian Observatory for Human Rights. The government has not confirmed the incident.