Syrian Kurds, Arab rebels and a Syriac militia have announced an alliance to fight the "Islamic State." The groups, backed with US air power and arms, are expected to launch an offensive against IS. 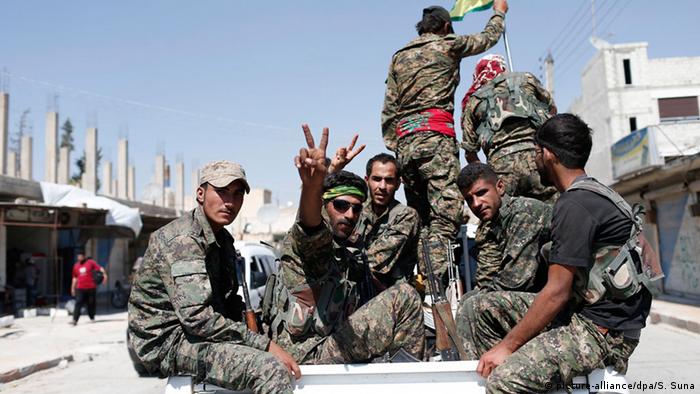 The new force, the Syrian Democratic Forces, formally cements an alliance that has been in place for months as the groups fought the Islamic State in northeast Syria. It includes the Syrian Kurdish militia YPG, its women's fighting force YPJ, alongside Arab rebel groups and tribes and a Syriac militia.

The announcement of a "unified national military force" comes as the United States ended a failed program last week to train and equip "moderate" Syrian rebels outside of the country. The Obama administration will instead arm vetted forces on the ground in Syria.

The US has provided the YPG, which US defense officials have described as the most reliable and best fighting forces on the ground, with air support against the Islamic State. Backed by US air power the Syrian Kurds were able to push back the extremist group's siege on Kobane earlier this year, and then moved on to take more territory, including the strategic border crossing of Tal Abyad (Gire Spi).

The formation of the alliance also comes as expectations grow that the force, backed by US air power and arms, will launch an offensive on the self-declared capital of the Islamic State in Raqqa.

The Syrian Kurds have followed a so-called "third path" during the conflict in Syria - neither siding with the Assad regime nor mainstream Arab opposition -- and have instead carved out three autonomous "cantons" in northeast Syria and Afrin. Their policies have earned the Syrian Kurds the ire of Arab opposition groups, who accused the Kurds of backing Assad.

The Syrian Kurdish experiment in self-rule, which includes ethnic rights for all groups, has worried Turkey, which views the YPG as an extension of the Kurdistan Workers' Party (PKK). The Syrian Kurds have said they do not seek independence but rather autonomy in a democratic and pluralistic Syria.

The relationship between the Syrian Kurds and the United States has strained relations between Turkey and Washington.

In Turkey, they're enemies of the state; in northern Syria, they’re important partners in the fight against 'Islamic State.' DW gives an overview of the Kurds, a historically persecuted people. (29.07.2015)