In Turkey, they're enemies of the state; in northern Syria, they’re important partners in the fight against 'Islamic State.' DW gives an overview of the Kurds, a historically persecuted people. They have neither their own state nor a common political organization. The Kurds, an ethnic group to which between 30 million and 40 million people belong, have settlements stretching across Iraq, Iran, Syria and Turkey.

Since the fight against the militant group "Islamic State" (IS) began, the Kurds have been playing an increasingly important role internationally - and not just because of their military victories in northern Syria. Their pursuit of autonomy is also once again in the forefront.

Around half of all Kurds live in Turkey, where they've been subjected to decades of oppression by the Turkish government. At the start of the 1970s, a group of left-wing activists gathered under Kurdish leader Abdullah Ocalan. It was this group that gave rise to the Kurdistan Workers' Party (PKK) in 1978. The PKK borrowed from the Marxist-Leninist tradition. In 1984, the organization first carried out an attack on a Turkish military site. Since then, the PKK has been fighting for a Kurdish state or autonomous region. According to estimates, some 40,000 people have died since 1984 because of the Turkish-Kurdish conflict.

In 1999, Ocalan was sentenced to life in prison in Turkey. At the end of 2012, the Turkish government began negotiating with the Kurdish leader. For a long time, it looked as though a peace agreement with the PKK was in the making. Due to the current escalation in the border region between Turkey and Syria, Ankara broke a ceasefire agreement. On July 28, 2015, Turkish President Recep Tayyip Erdogan declared an end to the peace process with the PKK. 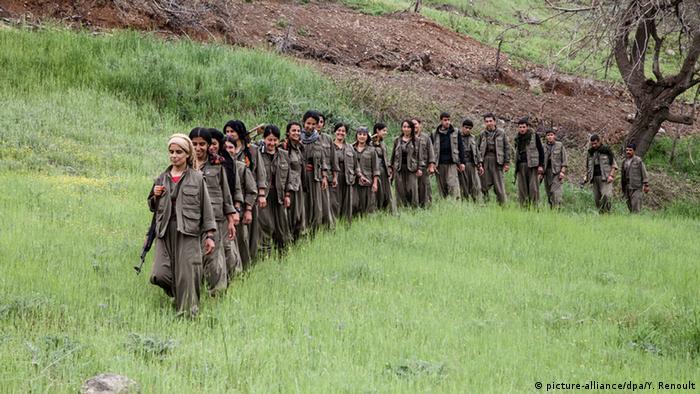 Men and women fight in the PKK militia in northern Iraq

Unlike the PKK, the HDP does not see itself solely as a Kurdish party, but as the "People's Democratic Party" as the HDP is known in English. The party was founded in 2012 when previously competing Kurdish organizations banded together into a single party. One of the most important founding members is the BDP (Peace and Democracy Party). This pro-Kurdish party played an important role in the negotiations between the PKK and the Turkish government in Ankara. The BDP worked to find a solution to the conflict with Turkey while at the same time being suspected of acting as the PKK's parliamentary arm.

The current HDP is a collective of supporters of PKK-founder Ocalan, Kurdish nationalists, feminists, democrats, and socialists. With this broad range of appeal, the HDP surpassed the 10-percent hurdle in Turkish parliamentary elections this past June.

In Syria, Kurds form more than 10 percent of the population, based on a census conducted before the start of the civil war in 2011. Since then, Syrian Kurds have had several military victories and founded three self-governing regions. The Democratic Union Party (PYD) is the most influential political party among Syrian Kurds. It was founded in 2003 at the behest of the Turkish PKK, which wanted a secular sister organization in Syria. 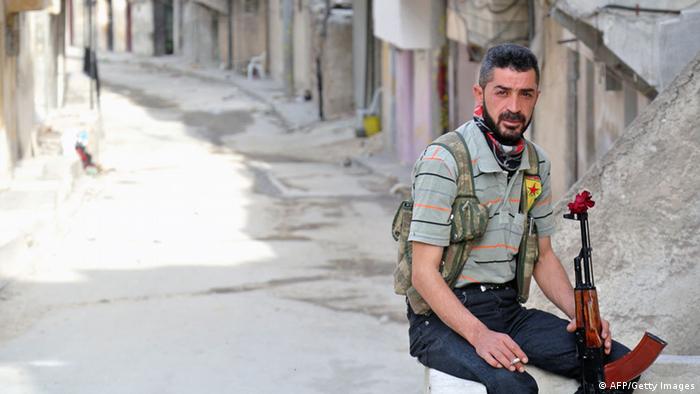 The YPG has fought government troops in Syria for years

The PYD also has a militant arm: The People's Defense Units, or YPG. The YPG militia has close links with the PKK. They fight in northern Syria and are seen as a significant partner in the US-led coalition against IS. The YPG now controls large parts of the Syrian border with Turkey. In the battle for the Syrian city of Kobani, YPG fighters, with help from US-led air strikes, managed to push IS out of the city.

The word peshmerga translates to mean "those who confront death." Unlike in Turkey, Kurds in Iraq are an established political force who govern a partly autonomous region in the northern part of the country. Some 5 million Kurds call the region home. The armed fighters of the Iraqi Kurds, the peshmerga, had been doing battle for decades with Iraqi forces under former dictator Saddam Hussein. Germany and other countries have been supplying the peshmerga with weapons to fight Islamic State. The Kurdish fighters have traditionally had a tense relationship to the PKK and the YPG. That's because the peshmerga, under Massoud Barzani who is the president of the autonomous region of Kurdistan in northern Iraq, cooperated with Turkey and the United States - two countries that are opposed to the PKK. Despite this, northern Iraqi Kurds fought together with the YPG militia in the battle for Kobani.

US caught between Turkey, Kurd rivalry in war against 'IS'

They're both key to US goals in the Middle East. But they're bitterly opposed to one another. Turkey has bombed Kurdish positions in Iraq. The airstrikes could hamper Washington's war against 'IS.' (28.07.2015)

By extending its airstrikes against the terror organization "IS" to include Kurdish militant PKK targets, Turkey risks escalating conflict with other Kurdish groups in the region. DW's Birgit Svensson reports from Irbil. (28.07.2015)

After signs that Ankara ended peace talks with the Kurdish PKK, Turkey's ruling party has turned around and said a compromise might still be met. Meanwhile, NATO has vowed solidarity with Turkey in fighting terrorism. (28.07.2015)