Syrian fighters have shot down a Russian jet over Idlib province and killed its pilot, Russian officials have confirmed. Al-Qaida-linked militants have claimed responsibility for taking down the plane. 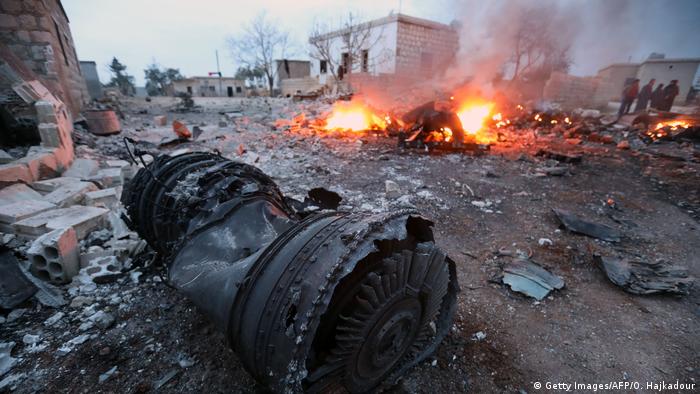 Syrian opposition fighters downed a Russian warplane near the town of Maaret al-Numan in the northwestern province of Idlib on Saturday, according to the London-based Syrian Observatory for Human Rights.

"Rebel factions shot down a Sukhoi 25. The Russian pilot came down in a parachute, before being captured," said Rami Abdurrahman, who runs the monitoring group.
Read more: UN warns of humanitarian disaster, displacement in northwest Syria

However, it later emerged that the Russian pilot had been killed by rebel fighters after he resisted capture by opening fire with his pistol. "The pilot was killed as he fought Islamist rebels who had shot down his plane and were taking him captive," Abdurrahman said.

The militant Hayat Tahrir al-Sham (HTS) group said it shot down the plane, but did not mention the pilot. The group is dominated by al-Qaida's former affiliate in Syria.

The HTS statement said the attack was in retaliation for a bombing campaign by Russian jets over Idlib.

Moscow also confirmed that the pilot had been killed. "A Russian Su-25 aircraft crashed during a flight over the Idlib de-escalation zone. The pilot had enough time to announce he had ejected into the zone, under the control of al-Nusra Front fighters," Russia's Defense Ministry said. "The pilot was killed in fighting against terrorists."

A video making the rounds on social media showed a dead man with a bloodied face, with bearded gunmen gathered around him. One of the men can be heard shouting "He is Russian." The authenticity of the video could not be independently verified.

The incident comes as Syrian government forces, backed by Russian air support and Iranian arms, have intensified their offensive into Idlib. The province is one of the last rebel-held bastions in Syria. It is also host to several Islamist groups affiliated with al-Qaida.

"There have been dozens of Russian airstrikes in the area over the past 24 hours," said Abdurrahman. "This plane was also carrying out raids there."

The Syrian regime launched its offensive against Idlib from the south and east in December.

According to Jan Egeland, who heads the UN's task force on humanitarian aid for Syria, almost a quarter of a million people have been displaced into or from Idlib since the latest onslaught began less than two months ago.

The escalating violence in Idlib comes as the United States launches an investigation into reports the Syrian government recently used sarin gas to attack opposition forces.

"We have other reports from the battlefield from people who claim it's been used," US Secretary of Defense Jim Mattis said Friday, although he admitted the US had no proof to back the claims.

"We're looking for evidence of it, since clearly we are dealing with the Assad regime that has used denial and deceit to hide their outlaw actions," he added.

In April, more than 80 people died in a sarin gas attack on the rebel-held town of Khan Sheikhoun in Idlib.

That prompted the US to launch airstrikes on a Syrian government military base, although Syria President Bashar Assad has denied the sarin strike was carried out by his troops.

Russia and Syria counter claims of responsibility for "gas attack"

Moscow and Damascus blamed rebel stockpiles of chemical weapons for the tragedy that has cost scores of civilians lives. Turkey said autopsies revealed the victims were likely subjected to the illegal nerve agent sarin. (06.04.2017)