The investigation follows fresh reports of sarin being used in the war-torn country. Last April, the US launched an airstrike against Syria's government after more than 80 were killed in a sarin attack in a rebel town. 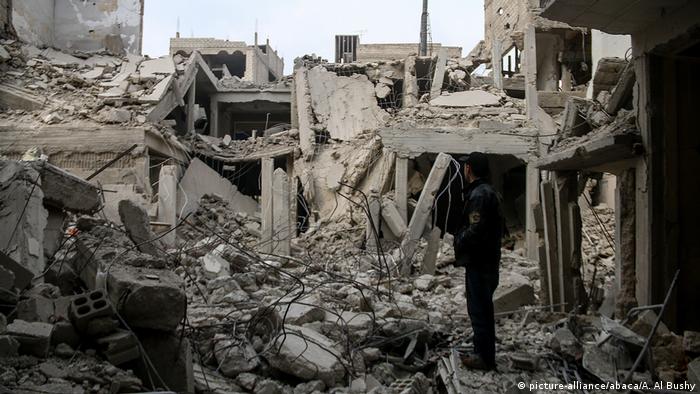 The United States is investigating whether the Syrian government recently used sarin gas in attacks on the opposition, US Secretary of Defense Jim Mattis said Friday.

"We have other reports from the battlefield from people who claim it's been used," Mattis said, adding the US currently had no proof to back the claims.

"We're looking for evidence of it, since clearly we are dealing with the Assad regime that has used denial and deceit to hide their outlaw actions," he said.

The US launched airstrikes against a Syrian government military base last April after more than 80 people were killed in a sarin gas attack on a town held by the Syrian opposition.

"You all have seen how we reacted to that, so the Syrian government would be ill-advised to go back to violating the chemical convention," Mattis said.

Mattis told reporters the Syrian government had committed multiple attacks using chlorine gas. Unlike sarin, chlorine gas is relatively easy to produce and is not banned by the Chemical Weapons Convention.

On Thursday, the US State Department said it was "extremely concerned" about reports of an imminent chlorine gas attack against an opposition-held suburb outside of Damascus.

The AFP news agency also reported senior officials had said the US was not ruling out military force in response to future chemical weapons attacks by the Syrian government.

Syria had agreed in 2013 to give up its chemical weapons to the Organization for the Prohibition of Chemical Weapons (OPCW).

But the UN and the OPCW have said the Syrian government has used sarin and chlorine gas weapons in the past two years, an accusation Syria has repeatedly denied.

Syria has been stripped of its voting rights at the Organization for the Prohibition of Chemical Weapons (OPCW), after the UN body repeatedly found it to have used chemical weapons in its civil war.

A new report from a chemical weapons watchdog says the Syrian air force dropped a chlorine-packed barrel bomb on the rebel-held Syrian city of Saraqib in 2018.

Financing terror, chemical weapons, forensics and digital archives: The ex-German prosecutor now heading the UN's special team on crimes of the so-called Islamic State explains where the search for justice will focus.