The US has issued sanctions against hundreds of Syrian scientists and officials for their role in developing chemical weapons. The measures come after a poison gas attack killed over 80 people in a rebel-held province. 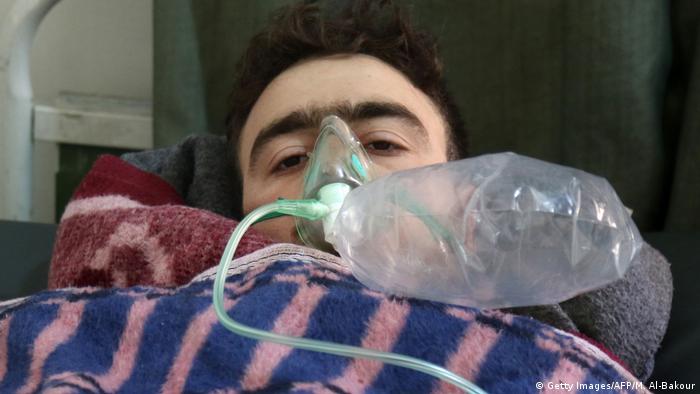 The Trump administration blacklisted hundreds of employees of a Syrian government agency on Monday for what Treasury Secretary Steven Mnuchin said was the use of sarin gas on civilians in early April.

The measures target 271 employees of Syria's Scientific Studies and Research Center (SSRC), making it one of the US Treasury's largest sanctions announcements.

All of the employees have expertise in chemistry or related fields and have worked or been involved in the chemical weapons program since 2012, said a US Treasury statement.

The sanctions include a freeze on all US assets and block any American business or person from dealing with them.

The British government welcomed US sanctions on Monday, saying the sanctions sent a signal that "actions have consequences."

"Sanctions send a clear signal that actions have consequences and seek to deter others from similar acts of barbarism. We welcome the role sanctions play in increasing pressure on the Syrian regime to turn away from its military campaign," Foreign Minister Boris Johnson said in a statement.

The US said the SSRC was responsible for developing the chemical weapon used in the April 4 attack in the rebel-held province of Idlib. The attack left 87 people dead in the town of Khan Sheikhun, including many children, prompting outrage from Western countries.

Washington has said Assad's forces carried out the attack while Assad has said the attack is a "fabrication" by the West.

Although the Syrian government maintains that the SSRC is a civilian research center, "its activities focus substantively on the development of biological and chemical weapons," US officials said.

Former US President George W. Bush issued the first sanctions against the SSRC in 2005, accusing it of producing weapons of mass destruction.

Under President Barack Obama, the United States sanctioned people and companies for supporting the SSRC in July 2016. And prior to Trump taking office, the Treasury sanctioned six SSRC officials on January 12, saying the officials were affiliated with chemical weapons research programs.

The US Treasury's move to sanction SSRC employees follows the US military's firing 59 Tomahawk cruise missiles at a Syrian airfield on April 7. The Pentagon said the Syrian government air base was used to launch the chemical attack.

The attack was also debated in the United Nations Security Council. A resolution demanding the Syrian government's cooperation with an investigation of the attack was vetoed by Russia, a close ally of Assad, on April 12.

Konstantin Kosachev: 'US [action in Syria] is a strong violation of international law'

In an exclusive interview, Konstantin Kosachev, head of the Russian Federation Council's Foreign Affairs Committee, talks about US-Russian relations after Donald Trump launched a missile strike against a Syrian air-base. (11.04.2017)