Syria, Ukraine to dominate OSCE agenda in Hamburg | Germany| News and in-depth reporting from Berlin and beyond | DW | 08.12.2016

As Germany ends its year-long presidency of the OSCE, Foreign Minister Frank-Walter Steinmeier has called for Russia to cooperate. He has warned that the "question of war and peace" has returned to Europe. 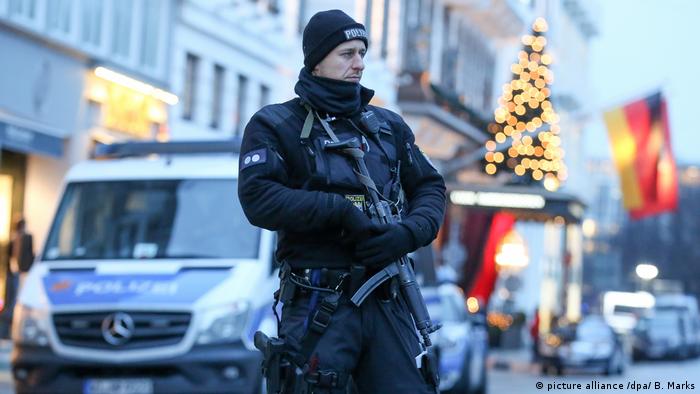 More than 10,000 police officers have been deployed for the OSCE meeting in Hamburg

German Foreign Minister Steinmeier and 13 of his colleagues have called for a relaunch of European arms control. The group said more dialogue is needed to prevent an arms race after Russia's actions in eastern Ukraine.

Russia says Aleppo rebels will be 'eradicated' if they don't withdraw

Syrian forces have retaken two-thirds of eastern Aleppo, where rebel factions have vowed to fight to the end. A monitoring group has said rebels are fighting a "war of attrition" against Syrian forces. (06.12.2016)

Foreign ministers of the Organization for Security and Cooperation in Europe (OSCE) are meeting in Hamburg for the 23rd Ministerial Council amid a heavy security presence.

Police said that more than 10,000 law enforcement agents have been deployed to secure the high-level meeting.

Questions concerning conflicts in Syria and Ukraine are expected to dominate the agenda, with German Foreign Minister Frank-Walter Steinmeier calling on Russia to cooperate constructively.

He urged Lavrov to push for a political solution to the conflict, which erupted in 2011 when government forces launched a deadly crackdown on peaceful protesters calling for Assad to step down.

More than 300,000 people have been killed and half the population displaced since the conflict emerged nearly six years ago.

'Question of war and peace'

Concerning Ukraine, Steinmeier has criticized Russia's involvement in the conflict along with the illegal annexation of the Crimean Peninsula in 2014.

We believed that after the end of the Cold War, "the question of war and peace would have settled forever in Europe," Steinmeier wrote in a co-written op-ed in the Frankfurter Allegmeine Zeitung. However, "the question returned" after Russia's annexation of Crimea, he added.

Despite numerous efforts to end the conflict in eastern Ukraine fueled by a pro-Russia insurgency, little has come out of the peace process.

Steinmeier emphasized that the need to strengthen the organization as a "place for constant dialogue" to "overcome conflicts," whether in Europe or abroad.

Some 50 foreign ministers and other high-ranking officials are expected to attend the meeting as Germany's presidency of the organizations comes to a close.