Syria's Bashar al-Assad faces mounting pressure from rebels, European leaders and the Arab League. As hostilities heat up, Syrian officials have threatened to use chemical weapons in the case of a foreign attack. 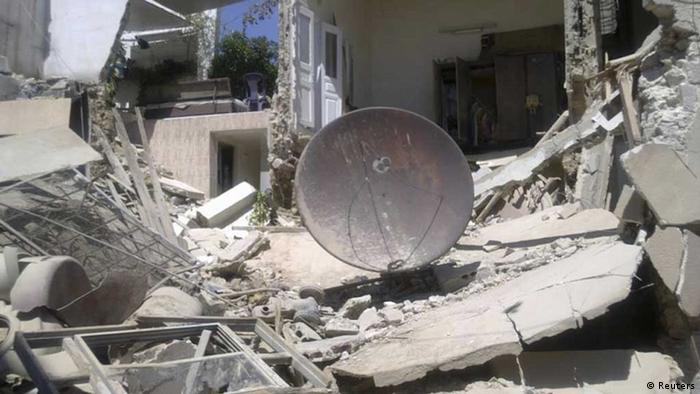 The Syrian regime threatened on Monday to use chemical and biological weapons if faced with external aggression. This is the first time Syria has admitted possessing weapons of mass destruction.

"No chemical or biological weapons will ever be used, and I repeat, will never be used, during the crisis in Syria," Foreign Ministry spokesman Jihad Makdissi said.

"All of these types of weapons are in storage and under security and the direct supervision of the Syrian armed forces and will never be used unless Syria is exposed to external aggression," he added.

His comments provoked a warning from US President Barack Obama.

"Given the regime's stockpile of chemical weapons, we will continue to make it clear to Assad and those around him that the world is watching," he said.

Condemnation came from UN Secretary General Ban Ki-moon as well as the foreign ministers of Germany and Britain. The foreign ministers were in Brussels along with their counterparts from all 27 European Union states to increase the pressure on Assad.

"It would be reprehensible if anybody in Syria is contemplating use of such weapons of mass destruction like chemical weapons," Ban told reporters in Belgrade on a tour of the Balkans.

"Threatening to use chemical weapons is monstrous," German Foreign Minister Guido Westerwelle said in a statement.

His words were echoed by British Foreign Secretary William Hague, who said that "it is unacceptable to say they would use chemical weapons under any circumstances."

The 27 foreign ministers on Monday issued a statement after their talks, saying they were "seriously concerned about the potential use of chemical weapons in Syria."

The EU banned weapons exports to Syria in May 2011, but up until now the member nations had the right to decide whether to inspect shipments believed to be in breach of the embargo.

The EU also offered support to the tens of thousands of displaced Syrian refugees, saying it would provide another $24 million (20 million euros) in aid, bringing its total humanitarian assistance up to $77 million.

"The scaling up of the EU assistance is the most concrete expression of our solidarity with the Syrian people affected by the conflict," the bloc's Humanitarian Aid Commissioner Kristalina Georgieva said.

The Arab League also took aim at Assad, urging him to step down and offering him and his family a "safe exit" from Syria.

In Damascus on Monday, Assad's forces claimed to have "cleansed" some neighborhoods following a weekend of intense bombardment of rebel areas in the Syrian capital. The increased violence comes in the wake of a devastating rebel bombing that killed four of Assad's top security officers.

In Syria's commercial hub of Aleppo, meanwhile, opposition forces announced on Sunday their intention to take control of the city. Activists have also claimed rebel progress along the northern Syrian border, with reports claiming the rebels control the Bab al-Salam border crossing with Turkey.

Rebels are also fighting for control of crossing points with Iraq and Jordan.

With both sides claiming progress, it is difficult to know whether Assad's forces or the rebels have the upper hand. What is clear, however, is that the death toll is mounting.

The Syrian Observatory for Human Rights, an observer group based in Britain, said that the death toll from Sunday's fighting stood at 123, including 67 civilians, 22 rebels and 34 soldiers.