Israel says its air force has struck Syrian army positions in reaction to rockets fired at the Israeli-occupied Golan Heights. The Japanese mother of Kenji Goto, a captive held by IS in Syria, has appealed for his life. 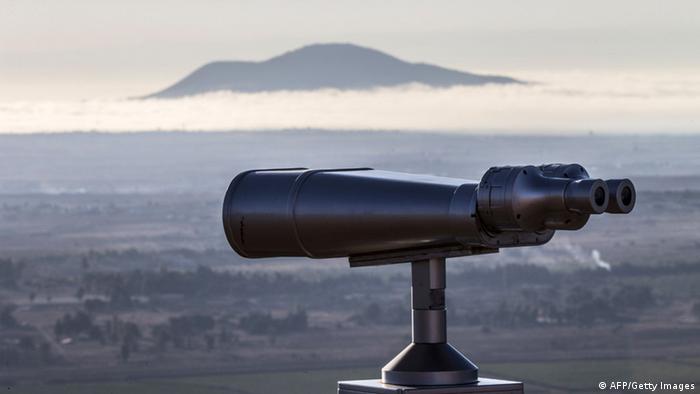 Israeli Defense Minister Moshe Yaalon warned the President Bashar al-Assad's government against further rocket attacks on Wednesday as the focus remained on a Japanese hostage held in Syria by Islamic State (IS) extremists.

Israel evacuated its Mount Hermon ski resort on the Golan Heights on Tuesday after at least two rockets were fired, allegedly from Syrian army positions. Syria, however, made no claim of responsibility.

Yaalon on Wednesday said Israel had struck Syrian army artillery posts. It was a clear message, he said, that "we will not tolerate any firing towards Israeli territory or violation of our sovereignty."

Early Wednesday afternoon, the Israeli military said an anti-tank missile was fired at one of its vehicles near the Lebanon border.

Israel's Channel 2 television said the vehicle was hit. There were no immediate reports of casualties.

The Lebanese militant group Hezbollah claimed responsibility for the attack, saying it was carried out by a group calling itself the "heroic martyrs of the Quneitra." This suggests the attack was in retaliation for an Israeli airstrike on the Golan Heights on January 18, which killed six Hezbollah fighters.

IS demands release of suspect

A new video emerged Wednesday on which a voice said the IS would kill Japanese journalist Kenji Goto unless Jordan released Sajida al-Rishawi, an Iraqi woman implicated in a set if 2005 terrorist attacks on hotels that killed 60 people.

Goto was abducted in Syria in October, apparently while trying to rescue Haruna Yukawa, who in a video last Saturday appeared to have been beheaded.

In Tokyo, Goto's mother Junko Ishido publicly pleaded to Prime Minister Shinzo Abe to work with Jordan to save her son.

"Kenji has only a little time left," she said.

Abe described the latest video as "despicable" but vowed that Japan would not give in to terrorism.

The voice on the video demanded the release of al-Rishawi, saying unless she was freed within 24 hours, IS would kill a captured Jordanian pilot and then Goto.

The pilot, 26-year-old Mu'ath al-Kaseasbeh, was seized in December near the extremists' stronghold of Raqqa when his Jordanian F-16 crashed.

The pilot's father, Safi al-Kaseasbeh, beseeched the Jordanian government to "meet the demands" of the Islamic State group.

About 200 of the pilot's relatives protested outside offices of the government in Amman, urging it to meet the captors' demands.

The chairman of Jordan's foreign affairs committee, Bassam Al-Manaseer told the Bloomberg news agency that Jordan was in indirect talks with IS to secure the release of Goto and Kaseasbeh via religious and tribal leaders in Iraq.