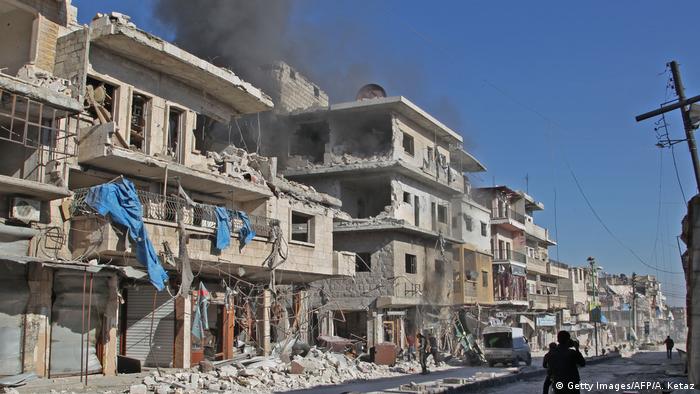 Tens of thousands of civilians have been displaced in recent weeks due to heavy airstrikes the province of Idlib in northwestern Syria, the United Nations said on Friday.

Up to 60,000 people have fled the region, news agency DPA reported, citing a spokesperson with the UN humanitarian agency OCHA.

The area, which is one of the last opposition strongholds in Syria, has been the target of intensified airstrikes carried out by the Syrian army and Russian forces.

More than 400 airstrikes have hit civilian areas in Idlib over the past 24 hours, the Britain-based Syrian Observatory for Human Rights said.

The Syrian army and Russia, which is allied with President Bashar Assad, deny indiscriminately bombing civilians and say that they are targeting al-Qaida-inspired militants.

Long lines of cars were seen leaving the opposition-held city of Maarat al Numan on Friday as thousands of people waited for a break in the violence in order to leave.

"The exodus is in the thousands. It's a humanitarian catastrophe, we are seeing people walking in the streets and people waiting near the homes for cars to take them out," Osama Ibrahim, a rescue worker from Maarat al Numan, told Reuters.

The UN said that a fuel shortage is limiting the movement of civilians and warned that roads leading out of the city are "extremely dangerous" as they are reportedly being hit by airstrikes. Many of the civilians are heading north towards the border with Turkey.

This week saw a surge in violence in Idlib, with clashes between Syrian government forces and armed rebel groups intensifying over the past 24 hours.

The Syrian Observatory for Human Rights said that over 80 people on both sides were killed this week.

The UN estimates that over 400,000 people have been displaced since the end of April when the Syrian army launched a large-scale offensive against rebels in the provinces of Hama and Idlib.

The conflict in Syria has displaced millions of people and killed over 370,000 since it began in 2011.

The German Foreign Ministry says risks are still too great to send migrants back to Syria. But Germany's state interior ministers have said they have agreed to return felons convicted of serious crimes. (05.12.2019)