Airstrikes in various locations in Syria killed at least 24 people on Monday in a particularly bloody day in the ongoing conflict. Eight children were among the dead. 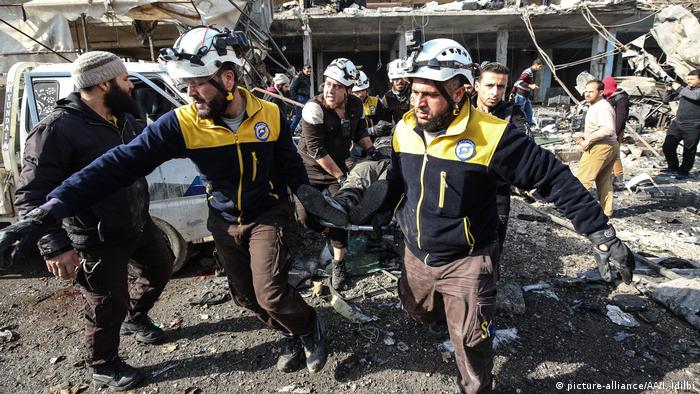 An airstrike on a market in the town of Maaret al-Noumaan in Idlib believed to have been carried out by Syrian forces, resulted in at least 13 civilian deaths on Monday. Later, Turkish artillery shells landed near a school in a Kurdish town, killing nine people, eight of whom were children.

Further deaths in airstrikes across the northern Idlib and Aleppo provinces made Monday a particularly bloody day. Syrian government troops recently renewed their push to reclaim the last opposition stronghold in the province while Turkey has broadened its military operations there.

Read more: Does Turkey still want to be a member of the EU?

The death toll figures come from UK-based Syrian Observatory for Human Rights. Two more people were killed when Russian planes struck a village south of Idlib city, they say. Overall, they say that 96 people, including soldiers, were killed in Idlib on Sunday and Monday.

How many people have been killed in Syria this year?

The Observatory estimates that 4,775 people have been killed since President Bashar Assad's government began a military offensive in April against opposition-held areas, including in Idlib province.

Separately, a building that was the target of sustained heavy shelling in the city of Aleppo collapsed on Monday, killing nine people and wounding 21.