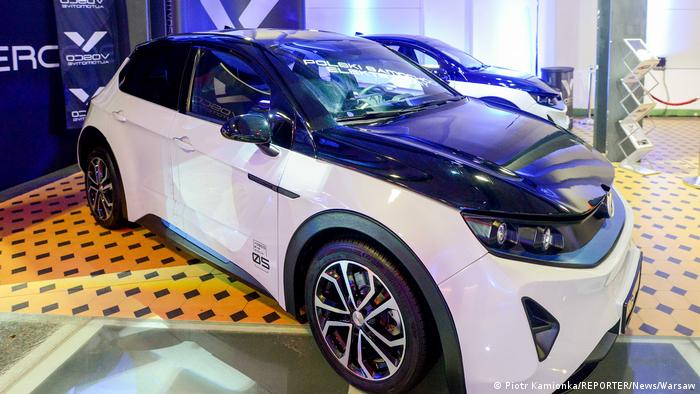 After the successful launch of a combustion engine version of the iconic communist-era car, the Syrena, its Polish carmaker Fabryka Samochodow Osobowych (FSO) wants to launch an electric version.

Design work on the Vosco s106 EV at the company's production site in Kutno, 100 kilometers (60 miles) west of Warsaw, began in 2017 and the first prototype was unveiled two years later.

Critics say only very early prototypes have so far been presented, that no platform supplier has been announced and that construction of the production plant has not yet commenced — but the enthusiasm is certainly there.

"The whole thing was born from the mind of the [ex]-CEO of Poland's Polfarmex pharmaceutical group, Mieczyslaw Wosko, who in 2016 established FSO Syrena, and began to resurrect the Polish car industry," Andrzej Stasiak from FSO told the Polish online news service The First News.

The project has been possible thanks to financial support from Polfarmex and the Polish government, and the EU's Innovative Economy initiative providing 4.5 million zlotys (€1 million, $1.15 million) to a total budget of 7.44 million zlotys, with engineering help from Lodz University of Technology.

Poland's Ministry of Infrastructure and Development decided that the car would not be mass-produced. Only 50 cars will come out in the first year, rising to 300 in the third year, all available only on the Polish market.

According to Patryk Mikiciuk, a motoring journalist, the project fits into a pan-European trend after the Fiat factory in Turin revamped its Fiat 500, alongside new versions of the Volkswagen Beetle and Morris Mini, while the French are reportedly thinking about resuming production of the Citroen 2CV.

Another Polish firm, Electromobility Poland, paved the way in the Polish e-automotive sector with the Izera electric car, said to be a cross between a Range Rover Velar and a Lexus RX, which was unveiled in 2020. Electromobility, which was set up with government backing in 2016 by four state-run power generation firms, Enea, Energa, Tauron and PGE, has already spent 30 million zlotys on its Torino design prototype.

Poland is not generally well-known for its automotive industry, but many cars rolled off the FSO production between 1948 to 2011. The Syrena was first exhibited at the Poznan Trade Fair in 1955 and manufactured from 1957 to 1972 by the FSO in Warsaw and from 1972 to 1983 by Fabryka Samochodow Malolitrazowych (FSM) in Bielsko-Biala, with a total of 520,000 made.

Like Skoda in Czechoslovakia and Trabant in East Germany, the Syrena was an iconic element of travel in communist eastern Europe. The vehicle, inspired by the Russian Volga limousine, was never exported and was aimed at a communist-era elite of scientists and intelligentsia.

"The Syrena project was actually the only fully Polish passenger car created in the history of Poland's post-war motorization," Stasiak said.

Designed by Cezary Nawrot, the Syrena Sport borrowed from Ferrari models, the Mercedes-Benz 190SL, the Chevrolet Corvette and others. Italian newspaper Il Giorno called the vehicle "the most beautiful car built behind the Iron Curtain."

The plant in Kutno has to date been known for its military vehicles — tur, zubr and dzik (aurochs, bison and boar). Syrena — a Polish mermaid legend has it — protects the capital city, Warsaw. 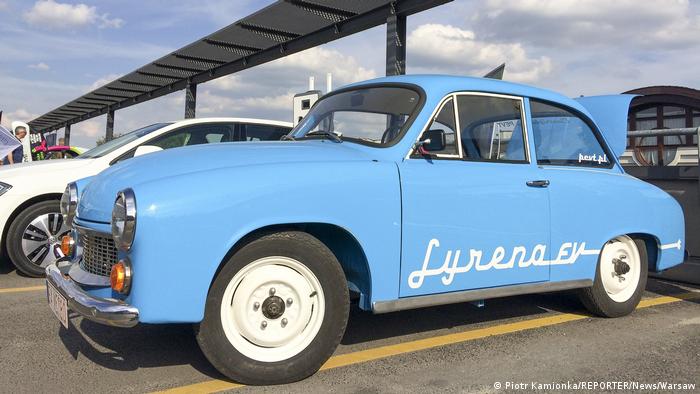 Poland made over half a million of these iconic Syrena cars

Damian Wolinski, one of the winners of a competition for Polish electric car designs organized by ElectroMobility Poland, is responsible for the design of the e-version's body.

"The concept of redesign, or resurrection of such cult cars, is very popular, although it is a risky endeavor," Wolinski told  The First News. "If you copy one to one the old stylistic features, the design will be out of date. We can draw inspiration from old vehicles, but we have to combine them with everything that is current and futuristic."

"This is the mission of our company — the resurrection of Polish motorization from the years before 2000, but with every achievement we have to look ahead. We can't constantly be stuck in those years, we have to create our own stylistic character and show people something that will interest them," said Wolinski.

The price has not yet been decided, but the car will be up to 20 kilograms lighter than its competitors, thanks to the innovative composite materials used instead of steel. The Vosco EV2 is 4,221 millimeters (14 feet) long, 1,719 mm wide and 1,513 mm high.

The Vosco EV2's 31.5-kWh battery will allow it to travel 290 kilometers, although the maker says on its website that drivers will probably be able to count on only a 210 km-250 km range. The battery using a 30 KW charger can be fully charged in an hour. Supplementing energy from the home network will take about 10-11 hours.

What is the future of green mobility?

Poland has the fifth-highest number of car owners in Europe and a fleet averaging 14 years and subsidies offered by the government for electric cars have so far led to 10,000 motorists switching to mains-powered vehicles.

Nevertheless, the domestic market alone might not be enough to support the large-scale manufacture of vehicles at a reasonable price. Added to this is the low number of charging stations in Poland, although it has been rising.

"Competing with leading automotive companies may prove very difficult for Vosco Automotive," Mazur said. "As much as I keep my fingers crossed for this project, I am afraid that the sentiment to the precursor of the e-Syrena may not be enough to achieve market success," he argued.

If the vehicle provides decent performance, range and everyday practicality, then combined with the fact that it will be the first Polish EV, it should encourage some drivers in Poland to make a purchase decision, Mazur believes.

"But such a vehicle cannot count on customer interest abroad resulting from the reference to Syrena, especially knowing that Poland is not a country commonly associated with the automotive industry," Mazur said.

The vehicle is expected to be available on the market at the end of 2024 at the earliest. It is too late to be able to successfully compete for customer interest in an increasingly difficult market, especially abroad, Mazur added.

Depending on the price, Vosco EV2 as a vehicle bordering on the urban and compact class will compete with models such as BMW i3, Honda e, Mini Cooper SE, Opel Corsa-e, Peugeot e-208 and the Renault ZOE or Hyundai IONIQ Electric, Nissan Leaf and Volkswagen ID.3. "And by the time production of the electric Syrena begins, competition in the B and C segments will be even greater," Mazur concluded.