Switzerland on collision course with EU over gun control | Europe | News and current affairs from around the continent | DW | 18.05.2019

Switzerland is facing the choice between changing its gun laws or falling out of Europe's open-border system. But in a country with a strong aversion to regulation, gun owners feel their traditions are coming under fire. 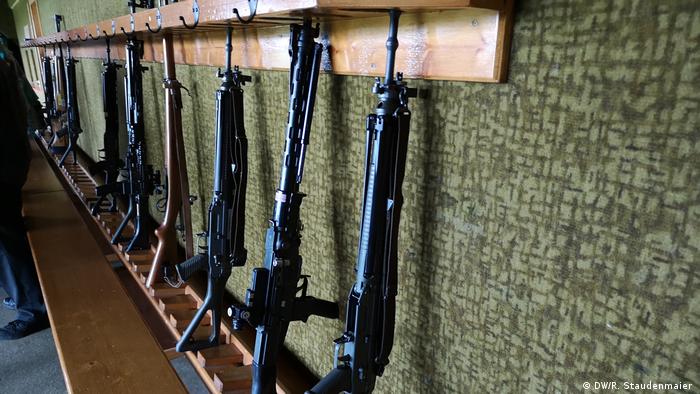 "There's this peace and inner calm that you need when shooting," Michele Meyenberger says as the sound of gun fire echoes through the clubhouse.

A magazine of ammunition for her Sturmgewehr 90, a modified semi-automatic rifle issued by the Swiss army, sits on the table as Meyenberger eyes the clock, knowing that it's almost her turn on the shooting range.

The 30-year-old is one of dozens of local rifle owners who have traveled to the Swiss village of Märwil for a shooting festival — where participants take aim at what seems like an impossibly small target located 300 meters (984 feet) down the field.

Like Meyenberger, many are using semi-automatic rifles, some of which they've been allowed to keep from their military service, weapons that may soon be more strictly regulated if a referendum passes this week.

A gun as a 'piece of sports equipment'

On May 19, Switzerland will vote on whether or not to reform its gun laws to adapt to changes in the European Union's weapons directive.

Although Switzerland is not a member of the EU, it must adapt its laws or, if the referendum fails, bow out of the Schengen Area — Europe's open-border system — and the Dublin Accord for handling asylum applications.

Under the new law, certain types of semi-automatic weapons will be banned.

Switzerland did secure exemptions for sports shooters and those who have kept their military service rifles. They would have to get special licenses and prove that they are part of a gun club or practice regularly. 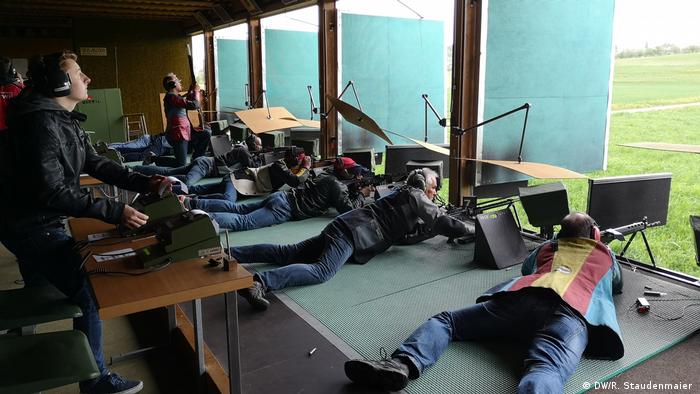 Still, for many shooting clubs and firearm associations, the new law goes too far.

"Just imagine, you have to organize a sport around a banned piece of sports equipment," Felix Thomas, the president of the Märwil gun club, tells DW.

He explains that there's an element of trust that currently exists between the government and the gun clubs — one that he believes would be eroded if the law is approved.

Switzerland has one of the highest rates of private gun ownership in Europe. The latest data from the Small Arms Survey, a Geneva-based NGO, estimates that there are over 2.3 million privately owned guns in Switzerland, with a population of 8.4 million.

Compared to the United States, which has the highest number of civilian-owned weapons in the world, the number of gun-related deaths in Switzerland is relatively low. In 2016, there were a total of 229 gun deaths in Switzerland, over 92% of which were suicides. That same year in the United States, there were 38,658 shooting deaths, 59% of which were suicides and 37% homicides. 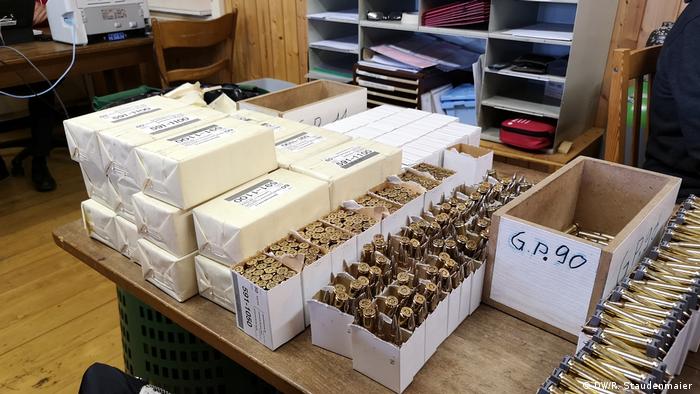 Ammunition at shooting contests like the one in Märwil are strictly rationed, and unused bullets must be returned

'No one feels like they need to shoot a robber'

The data begs the question: If there are so many guns in Switzerland, why aren't there more mass shootings? The answer, according to Swiss gun owners, is a key difference in the way they view their weapons.

"The Americans have their weapons for self-defense. It's an instrument of protection. For us, it's a piece of sports equipment. The relationship to the weapon is completely different," Thomas says. "No one feels like they need to shoot a robber with this weapon."

He explains that there are numerous rules in place that gun owners have to adhere to. Even at weekend events like the shooting festival in Märwil, participants have to pick up the ammunition from the club and return any unused rounds at the end. Every bullet is counted out exactly.

Exposure to weapons starts early, with children as young as 10 taking part in classes on how to shoot. But they receive formal training and frequent reminders of safety instructions.

"Here, they're always telling us how dangerous it is — and of course there is someone watching and monitoring to make sure you're doing it right," Meyenberger says. 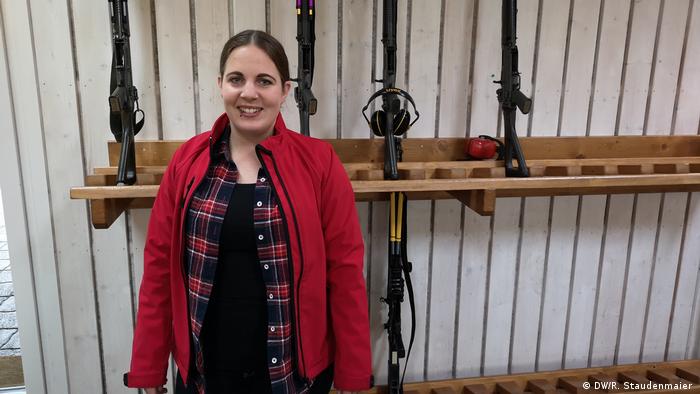 The Swiss government and most parties in parliament are strongly in favor of amending the gun laws — noting that if the referendum fails, the EU may be less inclined to give Switzerland a break amid the ongoing turmoil over Brexit.

However, many of those campaigning in favor of the reforms seem less convinced that the new gun laws will help Switzerland, and rather more worried about the consequences if they don't accept the changes.

"I never would have supported this law if the Schengen and Dublin agreements weren't linked to it," Martin Candinas, a Christian Democrat member of the Swiss parliament, tells DW.

"But when you're a part of such a group, you have to swallow a bitter pill every once in a while and accept that not everything is going to go the way you want it to," he added.

For other MPs, enacting tighter gun controls in Switzerland is just as important as remaining part of Schengen.

"Restricting the availability of weapons saves lives," Priska Seiler Graf, a Social Democrat member of parliament, tells DW. Despite comparatively low gun violence rates, "every person killed by a military rifle is one too many," she says.

Recent polls show far more women support tighter gun controls than men, something that Seiler Graf says is likely tied to cases of domestic violence and the fact that women are more likely to be threatened with a gun.

"I also think that the 'stand your ground' mentality, that everyone has a right to defend themselves with a weapon, appeals much less to women than men," she says. 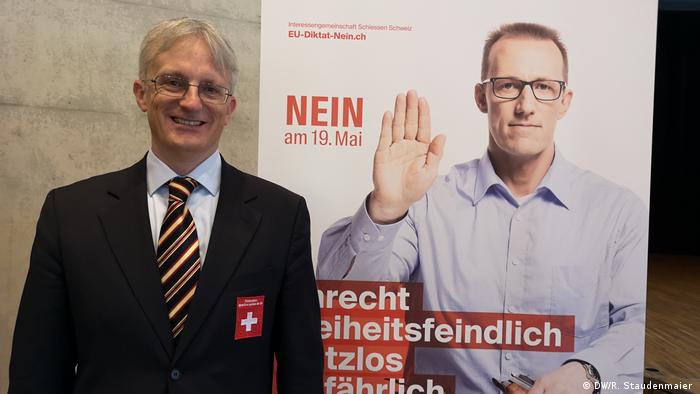 On a rainy Saturday a few weeks before the referendum, hundreds of people wearing suits and shooting jackets gathered in the Swiss city of Winterthur for the annual delegates assembly of the Swiss Shooting Sport Association (SSV).

With over 130,000 active members, the SSV is one of the largest sporting associations in Switzerland, and has been a powerful player in curbing gun control measures.

"We are opposed to an unnecessary and useless law that only punishes and restricts us," SSV president Luca Filippini tells DW, adding that the new EU rules will affect 80% of the association's members.

He and many others at the meeting are worried that accepting the EU rules would leave Switzerland open to even stricter gun law changes in the future. A provision in the EU directive calls for the weapons law to be reviewed in 2020 and every five years after that.

"The goal is to reduce the number of privately owned weapons, and we can't accept that," Filippini adds.

Although nearly all the delegates — who head several of Switzerland's major shooting organizations — reject the new EU reforms, not everyone in the hall is convinced that they should vote "no."

"I'm not completely decided yet, even though I'm a sports shooter," says Alfred Duft, a delegate who has been involved in shooting for 35 years. "For me, Schengen [Europe's open-border system] is fundamentally more important."

"The shooting tradition is there, but you can't overestimate it," he adds. "You also have to look to the future."

While Europeans decry America's gun obsession, European gunmakers have no qualms about selling firearms that are tightly regulated at home to the US. It comes as no surprise to discover where those guns pop up. (14.03.2018)