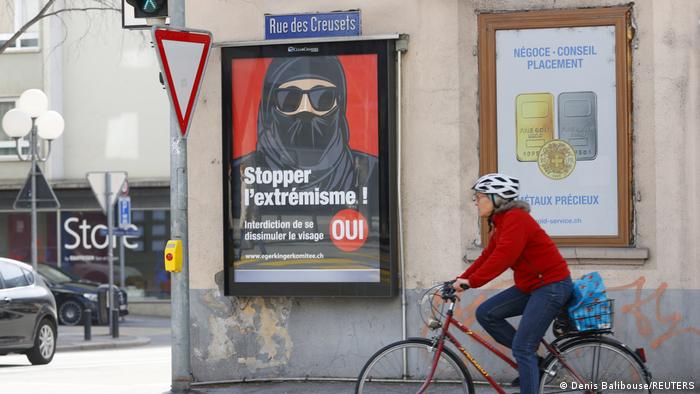 A poster for Sunday's referendum calling for a 'burqa ban'

Switzerland voted to ban "full facial coverings" in public places on Sunday. Provisional results showed that the vote in favor of the ban had succeeded with a slim majority of just 51.2%.

The referendum comes after years of debate, following similar bans in other European countries, such as France, Belgium and the Netherlands.

Switzerland operates a system of direct democracy that has allowed the vote to go ahead. Any topic can be put to a national vote as long as it gathers 100,000 signatures in the country of 8.6 million people.

Prior polls had indicated that a slim majority supports the move.

What the ban would mean

Under the proposal, nobody would be allowed to cover their face completely in public — whether in shops or the open countryside.

There would be exceptions, including places of worship.

The proposal does not specifically mention the burqa or the niqab — which leaves the eyes uncovered — but it is clear that the ban is targeting the Islamic face veils worn by some Muslim women.

Who supports the ban?

The Swiss People's Party — a populist, right-wing party that is the leading faction in parliament — has strongly backed the measure.

One of its campaign posters shows a caricatured image of the scowling eyes of a woman in a niqab above the words: "Stop Islamic Radicalism." 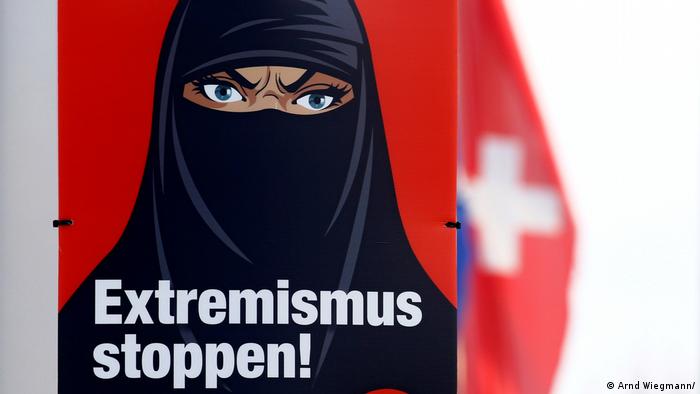 Muslim feminists have slammed the vote as 'racist and sexist'

Jean-Luc Addor from the party said that "fortunately" there are not many burqa-wearing women in Switzerland. He stressed that "when a problem exists, we deal with it before it gets out of control."

Who is against the ban?

The government and parliament oppose a nationwide ban.

Their counter-proposal would require people to show their faces to the authorities if necessary for identification, for example at borders.

This will be automatically triggered if the initiative is rejected.

Posters against the ban read: "No to an absurd, useless and Islamophobic 'anti-burqa' law."

"Besides being useless, this text [for the proposal] is racist and sexist," said Ines El-Shikh, spokeswoman for the Purple Headscarves feminist Muslim women's group.

She told news agency AFP that the proposed law created the impression of a problem, but "there are only 30 women in burqas in Switzerland."

A 2019 Federal Statistical Office survey found that 5.5% of the Swiss population were Muslims, mostly with roots in the former Yugoslavia. Most of these would not choose to wear a full-face veil.

Most votes were cast in advance of the referendum, but polling stations were open for a few hours on Sunday.