Namibia's ruling SWAPO party looks set to return to power, with just over half the votes reportedly counted from last Friday's poll. Observers reported some problems with a new electronic voting system. 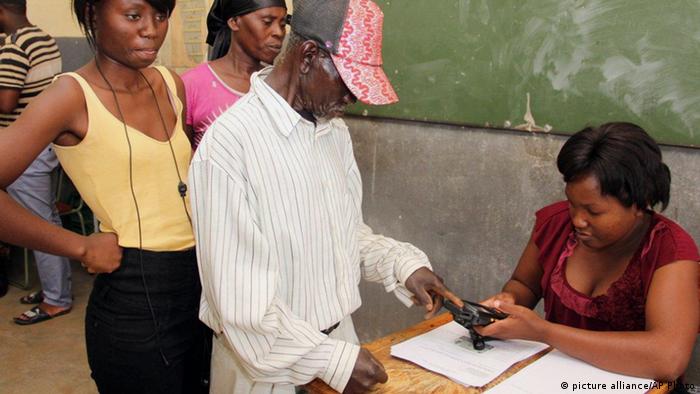 It was credited with having taken 77 percent of Friday's poll -- based on returns from about ten percent of 121 constituencies.

Turnout was put at 69 percent of the 1.2 million Namibians eligible to vote, according to official figures.

Opposition parties claimed thousands of voters were turned away from polling stations because of technical difficulties.

Results from Africa's first ever electronic vote were still being verified on Monday. Theo Mujoro, director of operations for the Electoral Commission of Namibia, said the commission had found mathematical errors in the results from some constituencies.

"The problem primarily is that, from the returns that we received from some of the constituencies, we have detected some mathematical errors and what we have been doing is that we are contacting the returning officers so that they may provide us with the sole document for us to be able to ascertain for ourselves and to effect the necessary corrections," Mujoro said.

He had previously said results would be available within 24 hours of voting.

There were nearly 4,000 electronic voting stations across Namibia on Friday. Observers from the African Union (AU) said the political environment leading to the election had been "generally peaceful and calm" but they did have some comments about the procedure.

South Africa's Minister of International Relations and Cooperation Maite Nkoana-Mashabane confirmed there had been delays at several polling stations because of difficulties with the voting machines.

Namibia is the biggest source of offshore diamonds and the world's fifth-largest uranium producer. Its other main industries are agriculture, tourism and fishing.