Germany coach Joachim Loew has named the provisional 26-man squad for the European Championship in Austria and Switzerland in June. Two uncapped players were named and a 19-year-old midfielder. 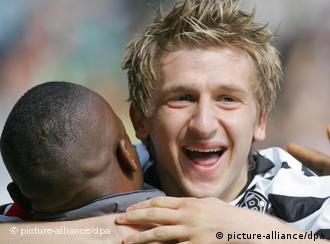 Marin said he was stunned and overjoyed by his shock inclusion

The 19-year-old, who has starred for Germany's Under-21 side, has been included in the preliminary senior squad by Loew for next month's tournament in Austria and Switzerland from June 7 to 29. 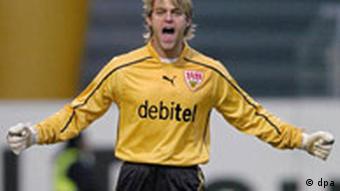 Marin has helped his side win promotion back to the Bundesliga this season after a year in the second division and the teenager admitted he was stunned.

"I am totally overjoyed and can hardly believe it," said Marin, who flies out with the squad on Monday to their Spanish training camp. "It was hard to take it all in at once. I am really looking forward to the 12 days in Majorca now."

There was also a surprise call-up for Bayer Leverkusen goalkeeper Rene Adler at the expense of Germany's reserve keeper Timo Hildebrand, 29, who had been a member of the German 2006 World Cup squad. Hildebrand moved to Spain's Valencia from VfB Stuttgart before the season and was regarded as an understudy to goalkeeper Jens Lehmann.

Striker Patrick Helmes has also made the squad after his second-division side Cologne won promotion back into to the Bundesliga.

Loew chose to make the squad announcement at the Zugspitze, Germany's highest mountain which is located on the border to Austria, in a symbolic gesture demonstrating his aim of reaching Europe's soccer summit.

Finalized at end of May

Loew will take his squad to Majorca, Spain on Monday for a training camp and will cut his squad to 23 when the Euro 2008 squad is finalized on May 28. 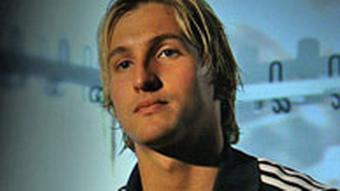 Rene Adler is the new man between the posts

Regarding the omission of Hildebrand, Loew said that decision had been particularly difficult.

"All the players omitted were painfully disappointed," he said although he wouldn't comment on whether it meant the end of Hildebrand's international career. "What this means for his further career we will have to leave open."

About Bosnian-born Marin, who has only played four matches in the Bundesliga, Loew said he provided something different to the squad.

"He is good man against man. He has a wonderful quality about his play, very strong in on-again-on situations," the coach said. "We don't have many players of this type … and that's why we decided to take him with us." 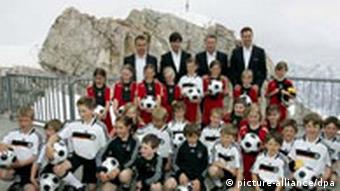 This isn't the team Loew named, though some of these kids may be dreaming big

Germany are in Group B and play Poland on June 8, Croatia on June 12 and co-hosts Austria on June 16.

Germany coach Joachim Loew said it would be difficult to choose a striker to fill the remaining forward position up for grabs in the squad for next month's European Championship. (09.05.2008)

Hosting a major international sports event always presents the organizers with a unique set of challenges. When an event is shared, the problems can sometimes double -- just ask Euro 2008 hosts Austria and Switzerland. (20.04.2008)

Fatherly Loew Tightens Reins on Players Ahead of Euro 2008

No beer, no dancing and absolutely no room service; national soccer team coach Joachim Loew has pulled the plug on his players' fun ahead of this summer's 2008 European Championships. (26.03.2008)