Jon Kent, the son of original Superman Clark Kent and journalist Lois Lane, kisses reporter Jay Nakamura in an upcoming issue of the comic book "Superman: Son of Kal-El." This has garnered some attention. 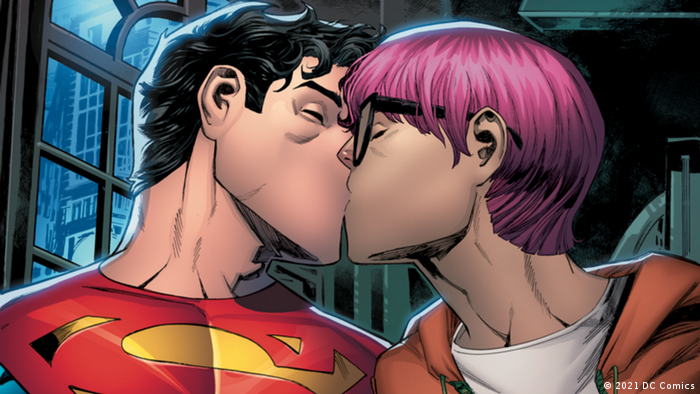 DC Comics' latest iteration of Superman's adventures will have a queer lead, the studio announced on Monday. October 11 is also observed as National Coming Out Day in the United States to support lesbian, gay, bisexual and transgender people.

Jon Kent, who is the son of original Superman Clark Kent and journalist Lois Lane, kisses reporter Jay Nakamura in issue five of the comic book "Superman: Son of Kal-El." It will be released on November 9.

Writers said they sought to steer away from using his sexuality as a "gimmick."

"We want this to be 'Superman finds himself, becomes Superman and then comes out,' and I think that's a really important distinction there."

Taylor emphasized the importance of diversity within the superhero realm, saying: "When I was offered this job, I thought, 'Well, if we're going to have a new Superman for the DC Universe, it feels like a missed opportunity to have another straight white savior.'"

The announcement has been welcomed across social media. Many users took to Twitter to express joy and to hail a superhero they could relate to because of their own sexuality. This Superman also cares about the climate crisis and refugees, making him further relatable to young people.

Javicia Leslie will play the lead role in the US series "Batwoman." This is the first time a Black woman will portray the superhero in live-action television or film.

The superhero created by comic author Stan Lee made his debut in 1962. That first Spider-Man comic book has now sold for a record $3.6 million.