Suez Canal officials release Ever Given ship after settlement

The Panama-flagged Ever Given is sailing in the Mediterranean. Egypt had held the container ship until authorities reached a compensation agreement with its owners. 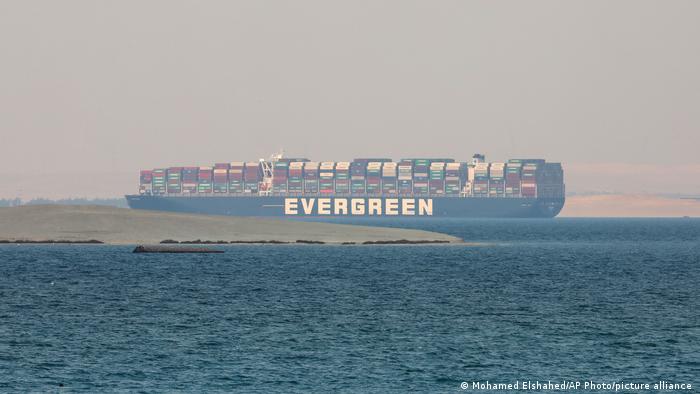 Ever Given, operated by Taiwan's Evergreen Line, was anchored in Egypt's Great Bitter Lake

Egypt's Suez Canal authorities announced the release of the Ever Given shipping vessel on Wednesday after reaching a settlement with its owners and insurers.

The giant vessel, which had blocked the crucial east-west waterway for nearly a week, was seen sailing on the Mediterranean on Wednesday.

According to Egyptian media reports, the ship headed for Rotterdam in the Netherlands.

"I announce to the world that we have reached a deal," Suez Canal Authority (SCA) chief Osama Rabie said in a ceremony carried live on Egypt's state television.

What we know about the settlement deal

The SCA had initially sought $900 million (€760 million) in compensation to cover lost revenue, salvage efforts and damage to reputation. The amount was later publicly lowered to $550 million.

It is unclear whether any other changes were made to the amount of money that the SCA would receive.

Rabie said Egypt would also receive a 75-ton tugboat from the ship's Japanese owner, Shoei Kisen Kaisha, as part of the compensation package.

According to the SCA, Egypt lost $12 million to $15 million in revenues for each day the waterway was closed.

Imbari Shipbuilding, of which Shoei Kisen Kaisha is a subsidiary, thanked the SCA.

"Our company has a large fleet of ships and will continue to be a regular and loyal customer of the Suez Canal, which in our view remains an indispensable asset for international maritime trade," said Yukito Higaki, of Imabari Shipbuilding.

Stuck in the Suez

On March 23, Ever Given was on its way to the Dutch port of Rotterdam when it wedged across the canal during a sandstorm.

It was finally dislodged six days later after a massive rescue effort, allowing hundreds of waiting ships to pass through the waterway.

SCA held the vessel and pressured its owners to compensate for lost revenue and the cost of salvaging it.

The waterway is the shortest shipping route between Europe and Asia. With 15% of world shipping traffic transiting the Suez Canal, it is a crucial source of foreign currency revenue for Egypt.