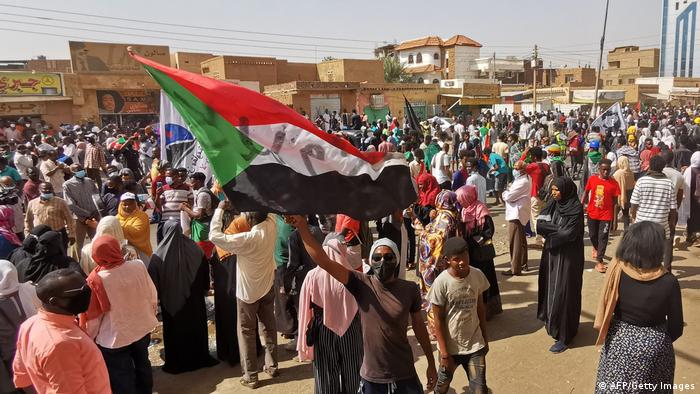 Demonstrators marched in different locations in Khartoum, demanding the removal of generals from power

A senior police officer and a protester were killed on Thursday in another day of mass protests against military rule in Sudan.

The officer was on duty at protests in Khartoum when he was killed, the police said in a statement on Facebook. He is the first security official to die in weeks of often violent unrest. Local media reported he was stabbed to death.

Sudan has been in turmoil since October 25, 2021, when the military dismissed Prime Minister Abdalla Hamdok's transitional government and declared a state of emergency.

It derailed Sudan's transition to democratic rule after three decades of repression and international isolation under autocratic leader Omar al-Bashir.

Pro-democracy activists have organized regular demonstrations against the military takeover. At least 64 protesters have been killed and hundreds of others injured in the violence.

Before the military takeover, a sovereign council of military and civilian officials ruled Sudan. It was supposed to oversee the transition period until elections in 2023.

On Monday, the United Nations started consultations that they hoped would lead to direct negotiations to resolve the crisis.

Demonstrators insist that a fully civilian government lead the transition, a demand rejected by the generals who say power will only be handed over to an elected government.