′Submit or suffer′ - Rappler shutdown worries Philippine media | Asia | An in-depth look at news from across the continent | DW | 18.01.2018

The Duterte administration has shut down a news website that has long been critical of his policies. What does this mean for the future of the Philippine free press? Ana P. Santos reports from Manila. 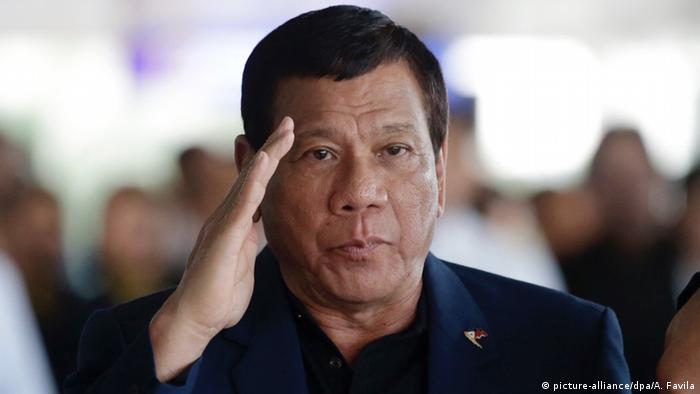 First Philippine President Rodrigo Duterte went after drug users and petty criminals, and after that, legislators and critics who dared oppose him. Now activists say that Duterte is targeting the Philippine media.

The Philippine Department of Justice said Wednesday it will launch a criminal probe into Rappler's operations.

President Duterte denied having any part in influencing the SEC decision. However, Duterte lambasted Rappler in his State of the Nation Address last July, saying Rappler was American owned.

"This is clearly harassment of the media using a corporate track. It is not as brazen as martial law [under Ferdinand Marcos], where there was actual closure of media outlets, but it has the same chilling effect," Rappler Managing Editor Chay Hofilena, told DW.

Rappler has been openly critical of the Duterte Administration's war on drugs, running investigative reports and exposing the complicity of police in a brutal crackdown that has left thousands of mostly poor young men dead.

Rappler also exposed how state funds are being used to bankroll a "keyboard army" of trolls and bots to spew government propaganda. 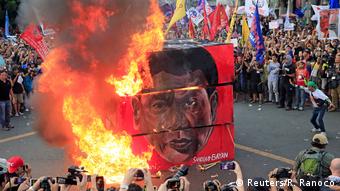 Protesters burn an effigy of Duterte last September in Manila

A man who 'cannot tolerate criticism'

This is not the first time that the Duterte government has attempted to silence a media organization.

Last year, Duterte levied tax evasion charges against the owners of the Philippine Daily Inquirer, another newspaper critical of his policies. He has also threatened not to renew the franchise license of ABS-CBN, a leading broadcast network.

"Once you silence independent media, all you will have left is government propaganda. This move will run roughshod over the opposition so the government can perpetuate its power and operate with impunity," said Hofilena.

In a press conference Tuesday, Duterte defended shutting down Rappler, calling it a "fake news outlet" which "abuses the holy grail of press freedom."

"You are not only throwing toilet paper, you are throwing shit at us," said the president.

Vergel Santos, chairperson of the non-profit Center for Media Freedom and Responsibility, told DW that the move was not surprising and was similar to many of Duterte's drastic actions against critics.

"Philippine media has been under siege since Duterte took over. This is a president with a tendency for overkill. His reactions are disproportionate. All of this is in line with Duterte's character. This is a man who cannot stand dissent, who cannot tolerate criticism," said Santos.

A dangerous place for journalists 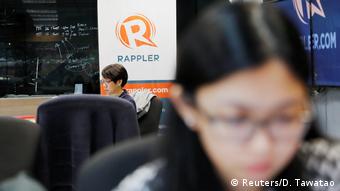 The Philippine press has enjoyed the reputation of being one of the most free and diverse in Southeast Asia, despite consistently being ranked as one of the most dangerous places in the world to be a journalist.

The Philippines ranked second in the International Federation of Journalists 2016 list of most dangerous countries for journalists, with 146 reporters and media staff killed between 1990 and 2015.

Against this backdrop, human rights and media freedom activists expressed alarm over the wider implications of Duterte's crackdown on the press.

"The government's move against Rappler should worry the Philippine public," Rachel Howard, a researcher at Amnesty International, told DW.

"Up until recently, the Philippines has been seen as a leader when it comes to media freedom in the region. Should this crackdown on media continue, Filipinos may lose the right to freedom of expression which many have up to now taken for granted," she said.

"Civil society and the public should vocally oppose this move now, before it is too late."

Human Rights Watch (HRW) labeled the move to shut down Rappler as consistent with the government's track record of silencing critics through punitive measures and the manipulation of state regulatory and judicial processes.

In February last year, Senator Leila de Lima, then the fiercest critic of Duterte's war on drugs, was jailed on what she claims are fabricated drug charges. Almost one year later, De Lima remains in detention, with no clear date for trial.

"The attack on Rappler marks a sinister escalation in the Duterte government's ongoing war on mechanisms of accountability in the Philippines," Phelim Kine, deputy director of HRW's Asia Division told DW.

"The message that Duterte is sending to the Philippine media by throttling Rappler is as simple as it is sinister: submit or suffer."

Editor's note: Ana P. Santos is a regular contributor to Rappler and has a bi-monthly column.