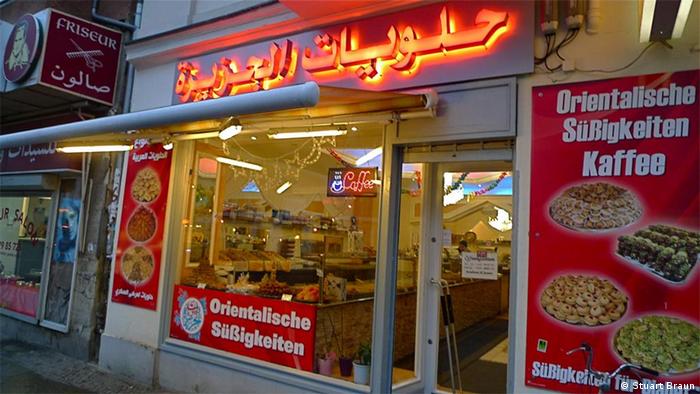 The Al Jazeera Konditorei or pastry shop on Neukölln's Sonnenalle is sparkling, a mirrored shrine to baklava, that nutty, syrupy Arab sweet that rules over Strüdel in this part of Berlin. The young woman serving me explains that this desert - of myriad varieties, I order mine with pistachio - is Palestinian, which is where her family came from before they moved to Lebanon, some time after the 1948 Israel-Arab war.

Seventeen years ago the family joined a wave of nearly 80,000 Palestinians that have moved to Germany, most escaping the Lebanese civil war in the 1970s - and often a life as fringe dwellers in refugee camps, a situation continuing to this day. Most ended up in Berlin, the Palestinian capital of Europe - at the time via Schönefeld airport in the East, where they could fly to without a visa before seeking asylum across the Wall. They soon established a thriving community in Neukölln along the so-called Gaza Strip, the main drag of an area since dubbed Little Beirut.

The Palestinians make up nearly half of Berlin's pan-Arab diaspora - including Syrians, Iraqis, Egyptians and some Tunisians - a rich seam of the city's ethnic admixture, and vying with the Poles as the second largest Berlin minority (after the Turks).

After leaving the pastry shop, I head for a carrot juice at a Palestinian café a few meters along Sonnenallee, served by a woman in hijab, or head scarf, who offers a range of elaborate fruit and vegetable juices, sundaes and tees, reminding me of my time in Iran.

Up on the wall, two German flags hem a Palestinian flag; there are also numerous depictions of the prophet Mohammed, scenes from Mecca, and a broken violin. As-Salamu Alaykum (peace be upon you) is the chorus as the regulars come and go. 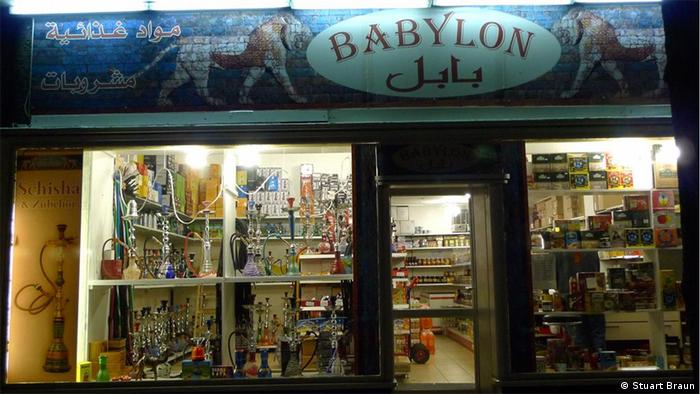 'Berlin is beautiful, there are people here from many countries,' says the shop owner.

Soon I'm buying groceries from an Iraqi, check my jacket in for cleaning with a Syrian woman who'd come from Damascus via Beirut and enjoy the best spinach Borek of my life care of some Kosovars. Sorry, the latter, while Muslims, aren't Arabs so I'll stick to the program. In the space of 200 meters it felt as if I'd crossed the entire Middle East. I even drop into the Sahara hookah lounge on the way home - a couple of blocks over and run by Palestinians - but it's a bit early.

"The Iraqi population is small, but we are all Arabs," says the owner of the Babylon grocer where I stock up on chickpeas and try my luck with some canned hummus. The nuts look good, too, while half the shop is bejewelled in hookahs (water pipes). "Berlin is beautiful, there are people here from many countries," he adds. He's been here for 14 years while his friend across the counter, younger, a Palestinian Lebanese, says he came when he was a child. "We are one community," says the owner, his friend agreeing. "There are no problems."

"I went back to Lebanon for a holiday recently; it's very beautiful, more beautiful than here," says the woman at Al Jazeera as I eye more treats. "But I wanted to come back. Berlin is my home." She says education is poor in Lebanon, that there's no social security; plus there is much more freedom in Berlin. "Here I can smoke at the café with my friends," she explains. And she doesn't wear a headscarf, unless she attends mosque. There are 72 to choose from in the city.

But Berlin's Arab scene extends beyond the Gaza Strip. I know an Egyptian guy, a chef, who works in my local German restaurant in Kreuzberg, and is a regular at the Horus Egyptian cafe up the road, which has been especially busy during the recent revolution. He's secular, says he has many different friends in Berlin, and a German wife. The woman at Al Jazeera also says she mixes with Turks and Germans, among others, not just Lebanese. Sounds like a milieu, not exactly the controversial picture of a parallel society suggested by politician and author Thilo Sarrazin. Or is it?

I want to know more, so head into the middle-class heartland of West Berlin to meet Ralph Ghadban, a Lebanese scholar who also came to the city in the 1970s. After first writing his PhD, he then worked with the Arab refugee community for 17 years in Berlin.

Ghadban, who has written the only book on the Lebanese minority in the capital, has made it his mission to integrate the community into a secular society based on 'democratic pluralism,' meaning fundamental shared values like individual rights. But Ghadban fears it hasn't worked.

He partly blames the policies of the German government, who long refused to integrate refugees, keeping them on temporary visas that forbade them to work, and which consigned them to welfare-dependency. Now, he says, 90 percent of Lebanese/Palestinians - most have since received German residency - are on the dole.

In the 90s, the government shifted from a "xenophobic" policy to a policy of multiculturalism, but the problem for the Arab community, says Ghadban, is that Islamicists were welcome to take up the slack. He fears that religion, and not pluralism, has taken hold, and that younger generations are not engaging with the mainstream, causing ongoing unemployment, and higher criminality. He also cites very low intermarriage between Arabs and Germans.

No doubt, Neukölln is thick with mosques, including the House of Peace inhabiting a former church. Attended by Arabs and Turks, it's strange to see this community milling around the red brick church, hijab stores and Islamic centers ringing the precinct.

But the mosque is trying to reach out, translating prayers into German, and offering integration and German language courses for women. Imam Mohamed Taha Sabri has publicly acknowledged "problems" among the Arab minority, and wants to combat youth criminality with education.

It's complex. But walk the streets of Neukölln, and you get the feeling the Arab diaspora, especially the Palestinians, are trying to recreate the community they lost. I consider that their homeland is occupied; they have nowhere to go back to.

The owner of the legendary Azzam restaurant on Sonnenallee says his family lived in Palestine for over a thousand years before they moved to Lebanon. After we swap notes, he piles my plate with extra falafel. Heavenly.

Columns from the series