The unidentified man was found alive in the nose wheel section of the cargo plane when it landed in Amsterdam, Dutch authorities said. He is believed to have slipped aboard before the flight left Johannesburg. 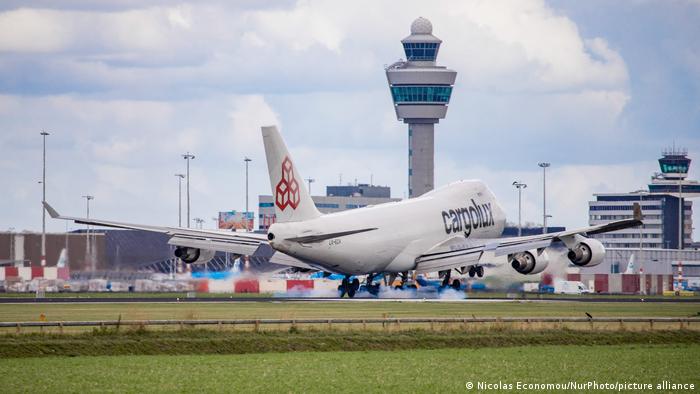 The Cargolux plane flew from Johannesburg to Amsterdam via Nairobi

A stowaway was discovered alive in the wheel at the front of a Cargolux freight plane that arrived at Amsterdam's Schiphol airport from South Africa on Sunday, Dutch military police said.

"This is definitely very unusual that someone was able to survive the cold at such a height  — very, very unusual," she said.

Helmonds said the man's age and nationality had not yet been determined. The man is believed to have climbed aboard the plane before it left Johannesburg.

Cargolux confirmed in an email to the Reuters news agency that the stowaway had been on a flight operated by Cargolux Italia.

"We are not in a position to make any further comment until the authorities and the airline have completed their investigation," a statement from the carrier said.

The only Cargolux freight flight arriving at Schiphol on Sunday was a Boeing 747 freighter that traveled from Johannesburg and made a stop in Nairobi, Kenya, according to Schiphol's website and flight tracking data.

It takes around 11 hours to fly between Johannesburg and Amsterdam.

Stowaways on flights to the Netherlands are rare, Helmonds added, noting that previous attempts had involved would-be migrants from Nigeria and Kenya.

Stowaways face a considerable risk of death during all phases of flight.

Some have fallen during take-off or landing, while others face hypothermia and hypoxia at the extremely low temperatures and low atmospheric pressure of high altitudes.

Last year, the body of a Nigerian man was found in the landing gear of a plane arriving at Schiphol airport.

In November, US border officials in Miami apprehended a 26-year-old man who had stowed away in the landing gear of a plane arriving from Guatemala.

During last summer's chaotic US withdrawal from Afghanistan, a number of stowaways fell to their deaths from the undercarriage of airplanes evacuating people from Kabul airport.