Strong winds have struck the United Kingdom, Denmark, Poland and Germany, leaving hundreds of thousands of homes without power. Bridges were shut, trains canceled and ferries docked as coastal surges led to flooding. 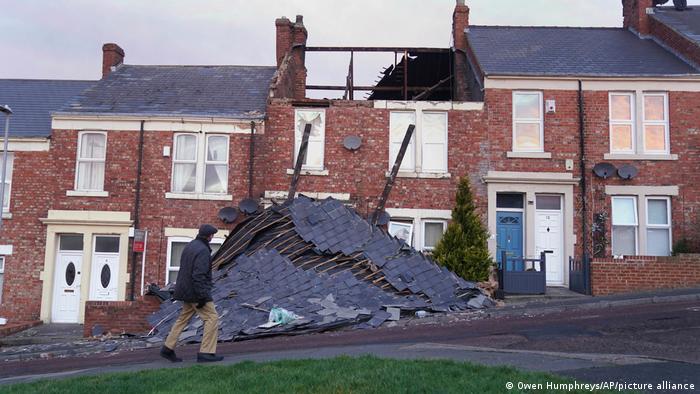 A fierce storm continued to pound Northern Europe on Sunday, causing coastal surges and forcing public transport to be canceled.

The storm system, which is known as Nadia in Germany and Malik in other countries, intensified a day earlier bringing hurricane-level winds at times to the North Sea and Baltic Sea coastlines.

As the storm moved eastward on Sunday, the fire department in the German capital, Berlin, declared an emergency and ordered residents to stay home, where possible.

On Saturday, one person in the German town of Beelitz in the state of Brandenburg just southwest of Berlin was killed when he was hit by an election poster that had been loosened by the wind, Bild newspaper reported. A companion was also injured.

Scotland saw winds of 100 miles (160 kilometers) per hour. A 60-year-old woman in Aberdeen died after being hit by a falling tree.

In central England, a 9-year-old boy was also killed when a tree fell on him. A man with him at the time was injured.

Some 130,000 homes across England were without electricity after power lines were cut.

Scottish first minister Nicola Sturgeon said that many in Scotland have had power reconnected but power disruptions will continue as another storm is due to come on Sunday.

In Poland's Wejherowo County, on the Baltic Coast, one person was killed and another injured by a falling tree, according to the Rzeczpospolita newspaper. Across the country, more than 680,000 people were without power.

In the Czech Republic, two workers were buried by a 5-meter (16-foot) wall that was blown down in an industrial area, with one dying of his injuries at the site of the accident.

Another fatality was reported by police in Denmark, where a 78-year-old woman died from severe injuries after falling in strong winds. Strong winds contributed to a storm surge in Schleswig-Holstein

The storm surge also struck the northern German city of Hamburg, where the Elbe River extends to the North Sea.

The waters flooded the fish market in Hamburg's St. Pauli district, and several cars in the city were washed away.

Also in Hamburg, a barge loaded with an excavator was pushed against a bridge by the storm. Bild reported that the excavator operator and captain fell overboard but survived.

Off the northern German coast, an empty freighter drifted in the strong winds. Emergency command from the port of Cuxhaven sent tugs to steady the 190-meter (623 foot) long Vienna, which took six hours.

Flood warnings were also issued for other parts of the northern German states of Schleswig-Holstein and Mecklenburg-Western Pomerania.

In the northern city of Bremen, a fire department spokesperson said they were sent out on nine separate calls to deal with fallen trees in the area, although no injuries has been reported.

In Denmark, the combined highway and railway Oresund bridge which links the country with neighboring Sweden was closed, along with the Great Belt Fixed Link bridge, connecting the Danish islands of Zealand and Funen.

Some 10,000 emergency workers were put on standby to deal with emergency calls, the Ritzau news agency reported.

In the town of Frederikssund, 20 people in need of daily care were moved to safety as care could not be guaranteed in the case of flooding, broadcaster TV2 reported.

On Zealand, where the Danish capital, Copenhagen is located, almost all regional train traffic had been suspended, according to the broadcaster DR.

Other countries in the Nordic region also reported significant damage.

Southern parts of Sweden were badly hit. Thousands of households were without electricity by Sunday afternoon, and ferries to the Baltic island of Gotland were canceled.

Severe damage to houses, cars and boats was reported in Norway.

Heavy snowfall throughout Finland caused road crashes and disrupted bus and train traffic in parts of the country.