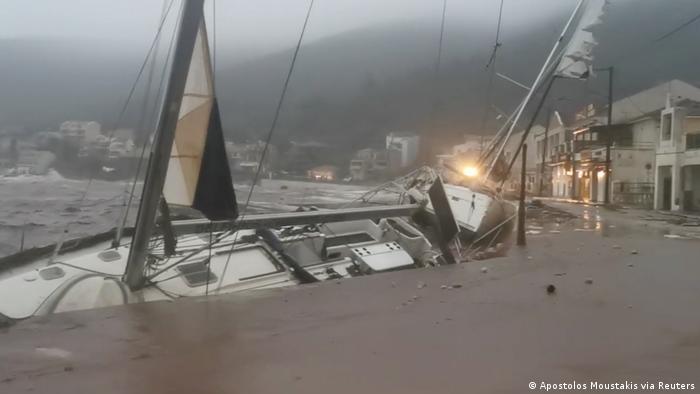 Storm Ianos, classed by forecasters as a rare hurricane-like "medicane," downed trees and caused flooding and power outages on Greece's Ionian islands on Friday, packing winds of up to 117 kilometers (73 miles) per hour.

Coastguards said a boat carrying some 55 migrants was in distress off the Peloponnese peninsula, southwest of Athens, and urged vessels in the area to assist.

National weather researcher Kostas Lagouvardos on state ERT television cautioned: "We have another 36 hours of intense conditions ahead of us."

Deputy Civil Protection Minister Nikos Hardalias said Ianos was likely to "remain west" and then head south, but could still bring heavy rain to the Athens region on Saturday.

The civil protection agency urged residents on the islands of Zakynthos, Cephalonia, and Ithaki, as well as other areas in the west to refrain from non-essential travel and to avoid basements.

"Trees are falling everywhere," Ionian Islands governor Rodi Kratsa told ERT on Friday and the state news agency ANA said a Swiss sailing boat moored off Ithaki was shoved to sea by waves. Its two occupants managed to make it back to shore, ANA added.

Aviation was disrupted with two Ryanair flights unable to land on the island of Cephalonia. They were rerouted to Athens.

As a precaution, migration officials said 778 asylum seekers, from three camps near Athens, would be relocated to a conference hall.

A further 28 minors from a fourth camp would be temporarily taken to a hotel.

Mediterranean tropical-like cyclones, or medicanes, have become more frequent over the past 25 years, including one in 2017 where flash flooding killed 25 people.

The boat capsized due to heavy winds, leaving at least one woman and two children dead. Search efforts carried on into the night, the Greek coast guard said.

Greek officials have threatened to make asylum conditional to resettlement in a new tent facility on the island of Lesbos. The German government has signaled its intention to take in more migrants in a "second step."