German beer brewers and beer lovers have protested in Munich against the barley patents of Carlsberg and Heineken. European authorities will soon revise the patent law. Will the beer patents be overturned? 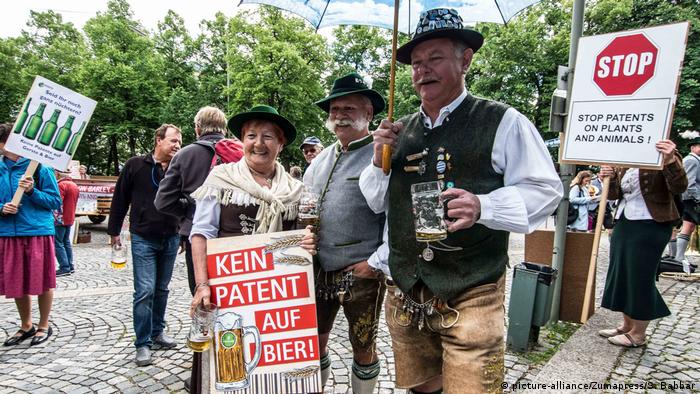 Dozens of protesters, six brewery horses and a marching band have demonstrated in front of the European Patent Office (EPO) in Munich to object to a patent by beer giants Carlsberg and Heineken.

In 2016, the two companies jointly patented a strain of barley that improved the taste of beer and allows for a more energy-efficient brewing process.

The beer patents haven't gone down well with Germans, a nation proud of its centuries-old tradition of barley cultivation and beer brewing. Breweries fear financial losses if patents on crops become the new normal, and activists believe food security is under threat. 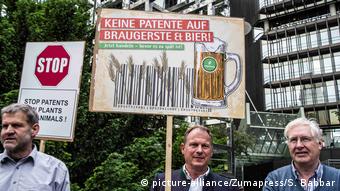 "No patent on brewing barley and beer": a sign at the protest

In November, No Patents on Seeds, an international coalition including Greenpeace, the Catholic charity Misereor and 300 farmers, urged Carlsberg and Heineken in an open letter to drop their patents. But the companies stood firm.

So, the coalition decided to take to the streets.

On Wednesday, the last day to officially object to one of the patents of the beer giants, around 100 protesters came with big fanfare and turned the technical duty of filing an objection at the EPO into a beer festival.

Surrounded by music, the organizers of the protest handed out non-alcoholic beer to demonstrators, bystanders and even to EPO employees.

Despite the party-like atmosphere, activists didn't shy away from pointing fingers.

"We might be handing out the last round of free beer at the European Patent Office today," said Georg Janssen, chairman of AbL, a Germany-wide association of farmers. "The office has so far only supported the interests of the industry and patent lawyers."

"We demand that patent restrictions will finally be effective. They are so important for consumers, farmers and breeders."

No invention, no patent 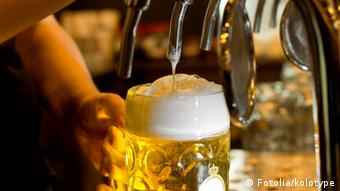 The German Beer Purity Law was adopted in 1516

At the end of June, the EPO's Administrative Council will meet in The Hague to discuss a proposal put forward by its member states that would clarify which species can be patented, and which can't. The proposal seeks to exclude plants and animals derived from breeding processes of crossing and selection from patents.

The proposal is likely to be accepted. Patents on food crops granted within the last few years, for example on tomato and broccoli, would then be prohibited.

Activists have welcomed the changes, but say they aren't going far enough. The proposal still includes loopholes that have allowed Carlsberg and Heineken to patent their barley in the first place, argues No Patents on Seeds.

The breweries' patent is based on random mutation. It's a hot-button issue in patent law: some say it's a natural process and cannot be patented, while others argue it's a technique often used in research labs and patentable.

"These patents are absurd, random mutations are no invention," Christoph Then, biotech expert and coordinator of No Patents on Seeds, told DW. "They monopolize seeds and threaten our biological diversity."

Carlsberg and Heineken have maintained their patent is legal and just.

"The barley raw materials are patentable because of the techniques used in the process to obtain these specific barley traits," John-Paul Schuirink, spokesman at Heineken, told DW. "They are not a patent on a discovery of a specific type of barley."

In November, the European Commission presented its interpretation of patent law stating that only methods of genetic engineering that directly intervene in the genome of plants or animals can be patented. This line of thinking would overturn the beer patent.

But the EPO is not an institution of the European Union, and includes non-EU countries such as Turkey and Switzerland.

Biotech expert Then is still optimistic that Carlsberg's and Heineken's patent will eventually be overturned. His coalition has been protesting for more than 10 years to strengthen prohibitions against patents on plants and animals.

"It can take years before the EPO sets stricter rules on what is patentable and what not, but we are confident the patents will be annulled," he said.

How German beer has changed brewing from Brazil to the Himalayas

The German Beer Purity Law is an absolute must for most German breweries. And because at 500 it is so old, it can be found everywhere in the world - even in the Himalayas. (22.04.2016)