Storied Berlin airport re-opens as park | Germany | News and in-depth reporting from Berlin and beyond | DW | 08.05.2010

Once the focus of the famous airlift to save Berlin from the clutches of communism after World War II, Tempelhof airport has been transformed from "the mother of all airports" into a public park. 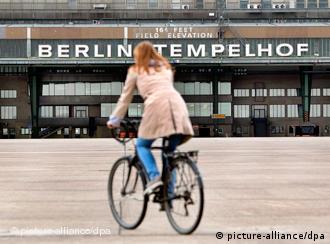 Bikes instead of planes are rolling across the tarmac now

The historic airstrip, once described by star architect Norman Foster as "the mother of all airports," underwent a clean-up to transform the 380-hectare (950-acre) aviation hub into an expansive urban oasis.

Although roughly the size of Central Park in New York, Tempelhof Park does not boast the hills, dales, ponds or leafy copses of its American counterpart. Instead, it presents open vistas of treeless, but breathtaking expanses, otherwise unheard of in an urban environment.

The old airport terminal is still intact, but the typical aeronautic paraphernalia - the landing lights, signals and other gear - have been removed.

As an airport, Tempelhof was the leading figure in the first chapter of the Cold War, when the Soviet Union after World War II attempted to strangle the life blood of West Berlin with its now notorious blockade. 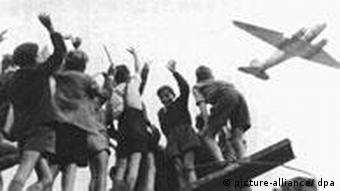 US and British pilots flew countless missions to airdrop supplies to the trapped residents of the free, but isolated, western half of the city surrounded by the Soviet Red Army.

West Berlin's gateway to the world saved the city from Soviet domination.

After reunification in 1989, the city decided to build a new and modern international terminal at Schoenefeld on the southeastern outskirts of former East Berlin.

But the bulldozers aren't finished with Tempelhof just yet. Starting in 2013, the new park will undergo a four-year, 60-million-euro ($48 million) facelift to become the home of the 2017 International Garden Exhibition. By then, it should look a lot more like its storied New York counterpart.

Berlin has been planning a new airport for 20 years. Now at least the terminal structure of Berlin Brandenburg International is complete. But many have raised doubts about the economic wisdom of the project. (07.05.2010)

Leftists and police clash at Tempelhof

Berlin's former Tempelhof airport has been the scene of overnight clashes between leftist demonstrators and police squads. Police say they blocked entry to hundreds of radicals trying to occupy the site. (21.06.2009)

Thousands of Berliners turned out on Tuesday to celebrate the "mission of mercy" that saved two million West Berliners from starvation. Airlift veterans are heroes and will never be forgotten, said Mayor Klaus Wowereit. (12.05.2009)