Thousands of Berliners turned out on Tuesday to celebrate the "mission of mercy" that saved two million West Berliners from starvation. Airlift veterans are heroes and will never be forgotten, said Mayor Klaus Wowereit. 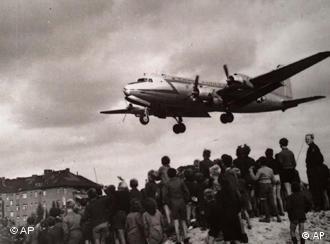 On June 24, 1948 Berlin became a city of darkness and silence. Three years after the end of World War II, a new conflict had begun – the Cold War between the three Western allies and the Soviet Union.

Berlin – the former capital of Nazi Germany – had come to symbolize the very crossroads of the Cold War. The city was occupied by Britain, France, the United States and the Soviet Union. But it lay within the borders of the Soviet-controlled East Germany.

In 1948 US President Harry S. Truman led efforts to organize West Germany as a separate nation. Soviet leader Josef Stalin responded by blockading all road, rail and river traffic into Berlin, cutting off its more than two million inhabitants from food, fuel and other vital supplies.

A mission of mercy

Stalin wanted to starve West Berliners into submission. But instead, the Allied planes, which only a few years previously had been bombing Berlin, became the city's lifeline.

At the height of the Berlin Airlift, more than 1,500 flights a day delivered up to 5,000 tons of cargo. For a period of 322 days, an allied plane landed every 90 seconds. 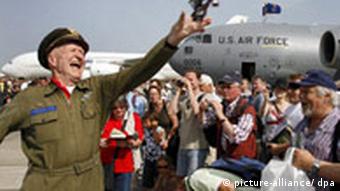 Colonel Gail Halvorsen throws candy into a crowd of Berliners

One day in July 1948 US Air Force pilot Colonel Gail Halvorsen used his time off to meet some children who had gathered at the end of the runway of Berlin-Tempelhof airport. He handed out his only two sticks of chewing gum, and promised that if they didn't fight over them, he would drop off more from his plane the next time he returned.

"I talked to them for an hour," he remembered upon his return to Berlin years later. "And throughout the time they didn’t lower themselves to be a beggar for something so extravagant."

"Anybody who had stood in that spot and looked into those kids' eyes would have said: 'Hey, I've got to give you something.'"

The next day, on approach to Berlin, he dropped some chocolate bars attached to a handkerchief parachute to the children waiting below. Every day after that the number of children would increase, and soon other pilots participated.

The US Army command approved of the gesture and expanded it into "Operation Little Vittles". When the news reached the United States, children all over the country sent in their own candy to help out, and soon major US candy companies joined in.

In the end over three tons of candy were dropped, and the aircraft were quickly named "Raisin Bombers" by Berliners. 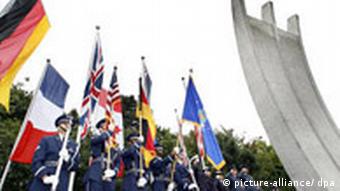 On Tuesday, Halvorsen was one of about 100 airlift veterans who took part in celebrations marking the 60th anniversary of the end of the Soviet Blockade.

He and the other "candy men" – as they are popularly called in Berlin – again dropped sweets from a vintage Douglas C-3 airplane.

In a festive event Berlin Mayor Klaus Wowereit described the airlift as "a human and technological masterpiece."

"The pilots were heroes," he said, "who deserve our deep gratitude for an act of unprecedented solidarity with a beleaguered city."

"Their service guaranteed freedom in the Western half of Berlin," he added.

Wowereit also laid a wreath at a memorial at Tempelhof Airport dedicated to the 78 pilots who died as their planes crashed during the airlift.

"The heroes were the Berliners," said Halvorsen upon his return to Berlin.

"They slept in bombed-out buildings with very little heat, no light except for two hours in the middle of the night, and they said: 'We'll never give in, we want freedom.'"

When Soviet dictator Josef Stalin saw that the airlift was working he sent out signals to the three Western allies. One minute after midnight on May 12, 1949 the Soviet Blockade of West Berlin was lifted.

What was once Europe's largest airport was be mothballed on Thursday, Oct. 30, when the last flight left Tempelhof. The airport played a central role in Berlin's history, but its future remains unclear. (31.10.2008)

The Berlin Airlift was America's Finest Hour 60 Years Ago

President Bush's visit to Berlin marks 60 years of the Berlin airlift. DW-World.de spoke to a Berliner who lived through the blockade, a US pilot who flew into West Berlin and the author of The Candy Bombers. (09.06.2008)