The pope and the European Parliament now label the Armenian massacres 100 years ago as "genocide." The German government is yet to follow suit. However, pressure and criticism have risen within Merkel's grand coalition. On Friday, German Foreign Minister Frank Walter Steinmeier omitted the label "genocide" when addressing the massacres of Armenians in the final years of the Ottoman Empire, during World War I.

On a visit to the Estonian capital Tallinn he said: "Past atrocities cannot be reduced to a single word or to a dispute over a word." According to the news agency AFP, the spokesman of the German government Steffen Seibert said that commemoration of the victims of "murderous displacement and persecution" should lie in the center of discussion. Historians should evaluate the incidents, he added.

This Wednesday, the European Parliament agreed a resolution urging Turkey to "recognize the Armenian genocide" and help promote reconciliation between both groups.

But the Turkish Prime Minister Ahmet Davutoglu on Friday angrily condemned the European Parliament's decision, saying it was a sign of growing "racism" in Europe.

President Recep Tayyip Erdogan has also criticized the Pope and the European Parliament in different addresses. 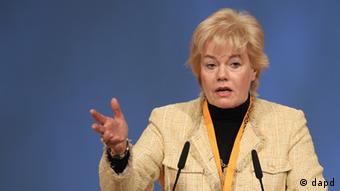 "The European Parliament should not take decisions that would result in hatred toward a certain religion or ethnic group if it wants to contribute to peace," he added.

Criticism among the ‘grand coalition'

The German Green and Left party label the massacres as 'genocide'. Also among the CDU politicians, criticism over the reluctance of the government has risen.

Erika Steinbach, a CDU politician and the president of the Federation of Expelles said "now it's time to give up reluctance and to acknowledge the genocide on Armenians officially."

Controversy over the issue has risen sharply as Armenians worldwide are getting ready to commemorate the 100th anniversary on April 24th of what they call the systematic extermination of their people by the Ottomans.

Armenians in the diaspora say 1.5 million of their forefathers were killed by the military leadership of the Ottoman empire to eradicate the Armenian people from Anatolia.

Germany's Bundestag parliament has scheduled a ceremony for the same day in Berlin.

Turkey's president has condemned the pope for using the word "genocide" to describe the killing of an estimated 1.5 million Armenians by Ottoman Turks in 1915. Turkey insists the deaths resulted from wartime unrest. (14.04.2015)

Turkey has told the Vatican's ambassador it was disappointed Pope Francis called the 1915 mass killings of Armenians "the first genocide of the 20th century." Ankara has long denied that the deaths amounted to genocide. (12.04.2015)