Turkey's president has condemned the pope for using the word "genocide" to describe the killing of an estimated 1.5 million Armenians by Ottoman Turks in 1915. Turkey insists the deaths resulted from wartime unrest. 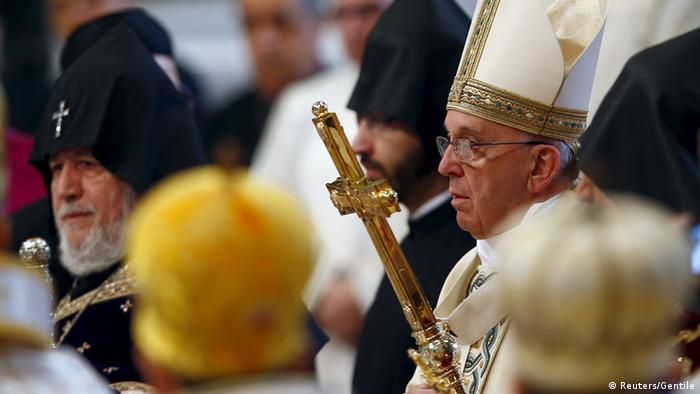 Turkish President Recep Tayyip Erdogan on Tuesday accused Pope Francis of spouting "nonsense" and warned the pontiff not to make "such a mistake again."

"We will not allow historical incidents to be taken out of their genuine context and be used as a tool to campaign against our country," Erdogan said in his first reaction to the pope's comments.

During a mass at St. Peter's Basilica on Sunday, the leader of the Catholic Church said the slaughter of up to 1.5 million Armenians in 1915 constituted "the first genocide of the 20th century," and urged the international community to recognize it as such. His choice of words sparked a diplomatic spat with Turkey, prompting Ankara to immediately recall its ambassador to the Vatican.

"When politicians and clerics take on the work of historians, it is not the truth that comes out but rather, like today, nonsense," Erdogan said. "I condemn the pope and would like to warn him not to make similar mistakes again."

Armenians say up to 1.5 million of their kin were killed in a targeted extermination campaign between 1915 and 1917, when the Ottoman Empire fell apart. Turkey, on the other hand, has long denied the deaths amounted to genocide, arguing that 300,000 to 500,000 Armenians and as many Turks were killed in wartime clashes when Armenians rose up against their Ottoman rulers and sided with invading Russian troops.

Almost two dozen European and South American states have recognized the Armenian deaths as genocide. Some European countries, including Germany, have avoided following suit, fearing damage to their relations with Ankara. The United States, a key ally of fellow NATO-member Turkey, has also shied away from using the term.

Official commemorations to mark the 100th anniversary of the massacres are expected to take place on April 24 in Armenia.