The statue was placed as part of a small demonstration in support of drug dealers. Three weeks earlier, anti-immigrant protesters gathered in the park. 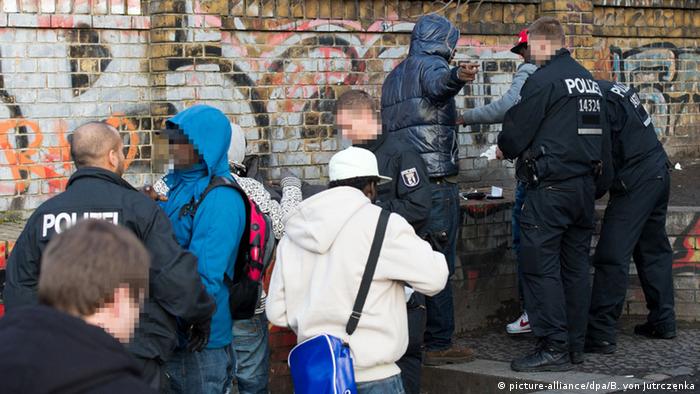 An artist erected a statue of a drug dealer in Berlin's notorious Görlitzer Park as part of a solidarity event with those plying their trade.

Holmquist organized the event under the motto: "Solidarity and human rights — also for drug dealers."

The statue of a black bagman holding a cell phone drew criticism from police who are constantly battling crime in what is known across the country as an open drug market.

A spokesperson from the police union, Benjamin Jendro, expressed disgust at the drug dealer statue.

"Erecting a statue for drug dealers sends the wrong message," the Berliner Morgenpost quoted him as saying. It is not only a "slap in the face to our colleagues, but also residents, who feel uncomfortable and insecure due to the presence of criminals," he said.

The event came in response to a demonstration organized by the far-right Pegida movement at Görlitzer Park three weeks ago. Protected by 140 police, Pegida followers criticized the absence of rule of law in the park.

Holmquist previously stirred controversy when he organized an exhibition about 13 African drug dealers and their often difficult journey to reach Germany.

A government survey of Berlin nightclubs and bars has found that half of partygoers take amphetamines and MDMA fairly regularly. It was the first comprehensive study of the use of club drugs in the German capital. (08.02.2018)

The German rail operator Deutsche Bahn has got a new plan for getting people in Berlin not to use drugs at one of its busiest stations: atonal music. But local residents are unimpressed by the experiment. (19.08.2018)