La Prensa — one of Nicaragua's leading newspapers — says its staff have been forced to flee the country amid a targeted crackdown by President Daniel Ortega's government. However, the paper said its work would continue. 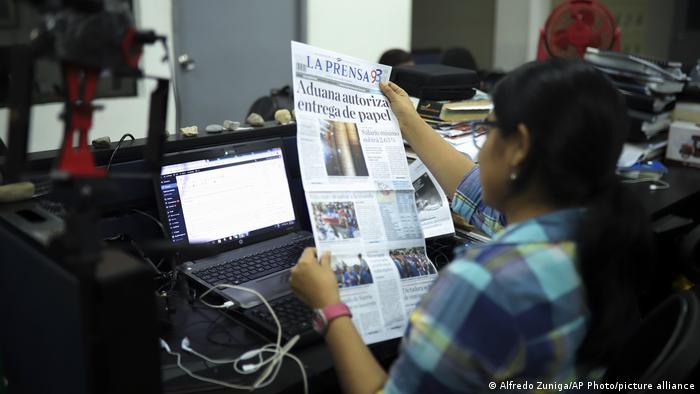 The online edition of Nicaragua's oldest newspaper La Prensa on Thursday said its journalists, photographers and other  staff had left the country for fear of being jailed.

President Daniel Ortega's government has repeatedly moved against independent press outlets that are critical of the administration. It has also shut down more than 1,000 civil society organizations in the Central American nation.

What did La Prensa say?

La Prensa says the relocation was decided after Nicaraguan authorities arrested two of its employees working as drivers earlier this month. That followed raids on the homes of several journalists from the newspaper.

"The persecution by the Daniel Ortega regime intensified this month against the personnel of La Prensa newspaper and forced the outlet's personnel to flee the country," the newspaper wrote.

"Reporters, editors, photographers and other personnel were obliged to flee Nicaragua in an irregular manner in the past two weeks for their safety and freedom."

"This situation forced La Prensa to put its staff under guard and then take them out of the country," adding that the staff would continue to produce the digital version of the newspaper from exile.

Although members of the newspaper's staff were not in their homes over recent days, La Prensa said police and civilians had arrived repeatedly and harassed their families.

The paper said staff had to sneak across the border because they feared they would be arrested at formal border crossings. It did not say how many of its employees had left Nicaragua.

Founded in 1926, La Prensa is Nicaragua's oldest newspaper. After the government repeatedly held shipments of printing supplies, it was forced to stop publishing a print edition last year.

The paper's two drivers who were arrested earlier this month were reportedly taken to the infamous El Chipote prison, where many political and media figures are detained.

In April, a court sentenced La Prensa director Holmann Chamorro to nine years in prison for alleged money laundering. Defense lawyers say the charges were politically-motivated and that there is no evidence against their client.

Since its crackdown, which began in 2018, Nicaragua's government has imprisoned nearly 190 people who human rights groups and the US State Department say are political prisoners.

Ortega's government claims his detained critics have conspired against the administration with backing from the United States.

Former Marxist guerilla Ortega won his fourth consecutive term in November in an election that US President Joe Biden dismissed as a sham.