St. George's Chapel, where Prince Philip is laid to rest

Almost all of the British royal family's funeral services are held at the church in Windsor Castle, where Prince Philip will be interred at the Royal Vault.

St. George's Chapel at Windsor Castle is 72 meters (236 feet) long, which makes the term "chapel" a bit misleading; the building looks more like a cathedral.

Prince Philip's body will be interred there, in the royal vault. However, after the death of Queen Elizabeth II, his remains are expected to be buried along with hers in the Royal Burial Ground on the Frogmore Estate close to Windsor Castle.

Windsor Castle is the official residence of Queen Elizabeth II, and it's where the Duke of Edinburgh lived at her side.

St. George's Chapel is the Windsors' wedding, christening and funeral church. Harry and Meghan were married there and their son, Archie Harrison Mountbatten-Windsor, Prince Philip's great-grandson, was baptized in the castle chapel. Many members of the royal family are buried there, including King Henry VIII, next to whose tomb in the chancel Prince Philip's coffin will be laid.

In the early 13th century, King Henry III had the first chapel built there. In 1475, King Edward IV decided to build a larger chapel, but construction work dragged on for five decades so that the church stood without a roof until 1528. 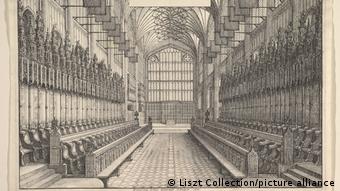 Inside the chapel, as seen in an etching from 1660

With is light sandstone, large windows and ornate flying buttresses, the chapel is considered one of the most important late Gothic churches in the world.

The so-called "perpendicular style," with its strict horizontal and vertical lines, was typical of English cathedrals at the time. The 19th century saw extensive renovation work, and that's when the royal crypt, where Prince Philip is to be buried, was added.

The most striking feature inside the church are the magnificently carved oak choir stalls for the knights of the so-called Order of the Garter. Above their seats hang the banners of current members, as well as the coats of arms of more than 700 former members of the order.

"It's an incredibly beautiful church, but there's also something oppressive about it because of its medieval feel," says Julia Melchior, an expert on the history of the British royal family. "These heavy stones and this wood paneling, it really breathes the history of the English monarchy." 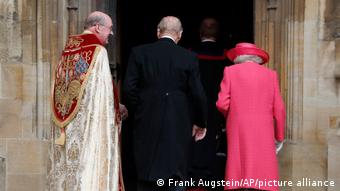 The knights of the Order of the Garter used St. George's Chapel for their ceremonies. The name of the chapel goes back to the military and national patron, St. George. Since 1833, the knights are also known as the Military Knights of Windsor. Prince Philip was a member of the order.

The queen is its grandmaster and appoints knights, mostly members of other royal houses. "It is a privilege to be appointed by the Queen and to be accepted into this order," says Melchior.

The order meets once a year in the sanctuary of St. George's — where Prince Philip's coffin will be laid at the funeral service. His order ribbon chain will be on the altar, as well all his military medals and decorations.

The chapel seats 800, but it is intended to host smaller, more intimate events. "It's more private there because onlookers can't quite get up close," Melchior says. "You can't go right up to the front of the church, because there are castle walls around it." 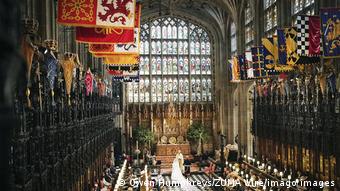 It's a different situation in Westminster Abbey, in the heart of London, where anyone stepping out of the church would face thousands of people right outside the entrance door. The weddings and funeral ceremonies of monarchs and their direct heirs to the throne almost always take place in Westminster Abbey.

Prince William and Duchess Kate said "I do" there on April 29, 2011, surrounded by 1,900 guests. Harry and Meghan, on the other hand, celebrated their wedding in St. George's Chapel with 600 guests. The wedding of the princes' parents — Prince Charles and Diana — was a real state event, but Charles' second wedding, to Camilla Parker-Bowles, took place without much fuss in the castle chapel.

Almost all funeral services for members of the royal family were held in St. George's Chapel. Even though Elizabeth Bowes-Lyon, popularly known as "Queen Mum," was publicly mourned in London, there was a family funeral service in Windsor Chapel. Princess Diana, the divorced wife of Prince Charles, was not accorded that honor. The funeral service for the Queen of Hearts took place in Westminster Abbey. 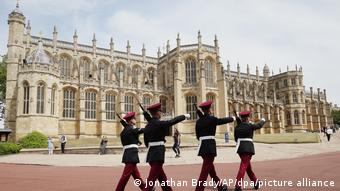 Guardsmen from the Royal Hussars march past St. George's Chapel in 2020

Many members of the royal family are buried in the private Royal Burial Ground cemetery at Frogmore, an estate on the grounds of Windsor Castle, named for the croaking frogs that live in the marshy area. High-ranking family members including King George VI and his wife — "Queen Mum" — and their daughter Margaret, the Queen's sister, are buried in St. George's Chapel.

The knights of the Order of the Garter will not take their seats in the choir stalls as usual at the funeral ceremony for Prince Philip, because only 30 family members are invited, due to the restrictions in the coronavirus pandemic.

There will be no funeral procession in London, either, says nobility expert Julia Melchior, adding that such a procession "would have been huge with the participation of the military." Speaking of military: the Queen does not want to see military uniforms at the funeral service, family members are asked to simply wear black.

Corrections from April 20, 2021: The article was corrected to specify that the Royal Vault at St. George's Chapel is not Prince Philip's final resting place. His remains will be buried in the Royal Burial Ground at Frogmore after Queen Elizabeth II's death. We apologize for the error.

The Duke of Edinburgh passed away peacefully at Windsor Castle. At 99, he was the longest-serving royal consort in British history.

The British royals come together for joyous and sad times in the historic St. George's Chapel at Windsor Castle, where Prince Philip will be laid to rest.