Englishman Demarai Gray is headed to the Bundesliga after just one Premier League appearance with Leicester City this term. Bayern Munich have fined Corentin Tolisso for breaking COVID-19 lockdown rules to get a tattoo. 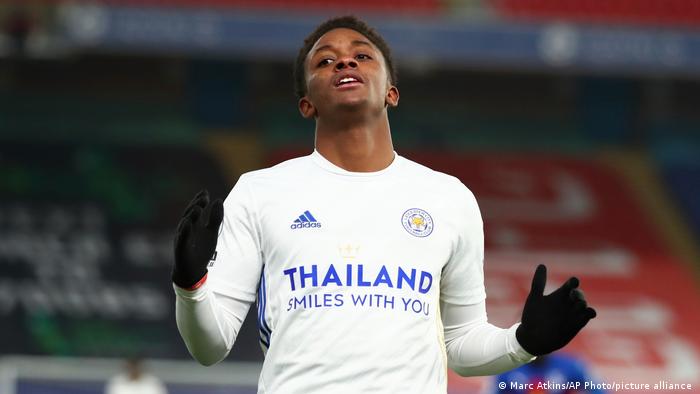 Demarai Gray has signed an 18-month contract with Bayer Leverkusen

Hours before the closing of the January transfer window, Leverkusen announced the signing of Demarai Gray from Leicester City.

The 24-year-old winger has signed a contract with the German side until 2022. His move comes nearly five months before his contract with Leicester City was due to expire.

Leverkusen will reportedly pay the Premier League side a transfer fee of €2 million ($2.4 million).

Gray joined Leicester City during their remarkable Premier League title season in 2015-16. But he has made only one league appearance this season and has played four games for Leicester City's reserve team.

Shortly after their 4-1 win over Hoffenheim on Saturday, Bayern Munich announced that it has fined Corentin Tolisso for breaching Germany's COVID-19 lockdown rules and getting a tattoo.

A video surfaced on Friday depicting a maskless Tolisso getting a tattoo on his right arm in a tattoo parlor that was supposed to be closed.

"Of course it's aggravating what [Tolisso] did and of course he will be fined," Bayern sporting director Hasan Salihamidzic told Sky Germany after Bayern's win. "He knows he made a mistake. He will pay a fine, which we will donate to charity."

Salihamidzic did not provide more details on the fine amount, only that the amount is one Tolisso "will feel."

Leon Goretzka will miss Bayern Munich's home game against Hoffenheim on Saturday after testing positive for coronavirus, the club said on Friday.

The German international joins Javi Martinez in contracting the virus, though Bayern say both players are in good health.

The champions have the chance to go 10 points clear, at least for a few hours, on Saturday.

Relegation-threatened Cologne have signed attacking midfielder Max Meyer for the rest of the season.

"For me the decisive perspective was to be able to play," the 25-year-old Meyer said in a statement on Cologne's homepage on Wednedsay. "I want to use the chance to present myself at a top level and help Cologne stay up."

Meyer, who made four appearances for Germany between 2014 and 2016, previously played in the Bundesliga with Schalke. He left the Gelsenkirchen club to join Premier League side Crystal Palace in 2018 but was released from his contract earlier this month.

Cologne, who are in 16th place, the relegation playoff spot in the Bundesliga standings with just 15 points from 18 games, face a crucial match against Armina Bielefeld, one place and two points above them, on Saturday.

According to a report published in Wednesday's edition of the German weekly SportBild, national team head coach Joachim Löw is planning to name 17-year-old Bayern Munich midfielder Jamal Musiala to his squad for three World Cup-qualifying matches in March.

The Stuttgart native, who moved to England as a child, is also eligible to play for that country – and made his debut for the English Under-21 side last November.

Musiala, who turns 18 next month, came through Chelsea's academy before joining Bayern in 2019.

The attacking midfielder showcased his talent with a superb long-range goal in last month's top-of-the-table clash at home to RB Leipzig, which ended in a 3-3 draw.

Embolo confirmed on Instagram last week that police wrote him up after he visited a friend in Essen following a game between Gladbach and Stuttgart on January 16. He denied previous reports that he had attended a larger party that was taking place at a closed bar nearby.

Gladbach did not specify the amount Embolo was fined, although sporting director Max Eberl said in a club statement that the fine would "hit him hard."

Embolo was left out of the squad for the club's match against Bremen following the incident. Before the game, head coach Marco Rose condemned the Swiss striker's actions as "completely senseless for someone in the public eye."

The coronavirus pandemic could cost Europe's 20 highest earning football clubs over €2 billion ($2.4 billion), according to forecasts from financial experts Deloitte.

The organization's latest "Football Money League" report shows that revenues of the 20 clubs analyzed fell by 1.1 million euros last season due to closed stadiums and television rebates. The outlook isn't expected to get better quickly, with fans still absent in most major leagues.

"The revenue that's been missed out on is driven by the lack of fans in the stadium, the lack of interaction on a matchday - fans spending in the club shop and buying food and drink - and there is an element that relates to revenue that broadcasters have either clawed back or deferred to next year," said Tim Bridge of Deloitte's Sports Business Group.

According to the report, Bayern Munich, up to third, remain the richest German club. Borussia Dortmund come in 12th, while relegation-threatened Schalke are 16th and Eintracht Frankfurt are a new entry in 20th.

The requests reportedly included moving players into private homes with tennis courts and getting them better meals.

Nick Kyrgios called Djokovic a "tool" in an interview, while Rafael Nadal, though not as direct, appeared to also take issue with Djokovic's demands.

"We all try to help each other," Nadal told ESPN on Monday. "Some need to make public all they do to try to help others, while some of us do it privately without publishing our calls or making propaganda with it."

Djokovic said his good intentions had been "misconstrued." The reigning Australian Open champion had previously faced widespread condemnation for the Adria Tour, which flouted pandemic regulations last year and led to a series of positive coronavirus tests.

After Frank Lampard was sacked as Chelsea coach, media reports in England suggest that Thomas Tuchel is in line to take over the Premier League club.

Tuchel has only been out of work for a month since being relieved of his duties by French side Paris Saint-Germain, with whom he won back-to-back Ligue 1 titles and reached the Champions League final during his two-and-a-half years in charge.

Struggling Bundesliga side Hertha Berlin have turned to former head coach Pal Dardai to save them from relegation after sacking Bruno Labbadia on Saturday.

"Returning to the first team was certainly not part of my plan," said Dardai, who has been in charge of Hertha's under-16s. "But I don't need to tell anybody what Hertha BSC means to me, so there was never any doubt that I would help out in this situation."

The Tampa Bay Buccaneers will become the first ever NFL franchise to compete in a Super Bowl in their home city when they face the Kansas City Chiefs in Tampa, Florida, on February 7.

The former Borussia Dortmund player struggled to keep his career going after he left the Bundesliga giants. An unsuccessful move to Turkey was followed by a return to Germany where he never really settled, with his career fizzling out.

His best days came at Dortmund, where he made 176 appearances and twice won the Bundesliga. During that time he also played for Germany and was a member of the 2014 World Cup squad that won it all in Brazil.