Montenegro's parliament has approved a new pro-NATO government, but the pro-Russia opposition boycotted the vote. The country's NATO bid has created political tensions. 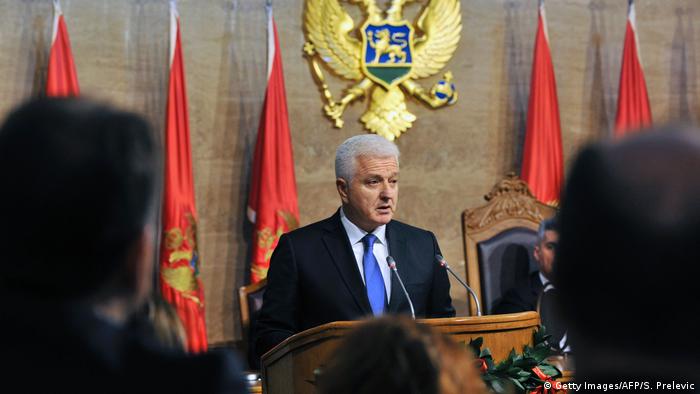 Belgrade claims that "Western and Eastern" intelligence agencies are extremely active in the Balkan nation. What is behind the Serbian government's rhetoric? (31.10.2016)

Dusko Markovic's new government was approved by a narrow 41 votes in the 81-seat parliament. The prime minister gained the support of his Democratic Party of Socialists (DPS), Social Democrats and small ethnic parties, but the opposition boycotted the vote.

Markovic, a close ally to outgoing prime minister Milo Djukanovic, pledged to bring the country into NATO by next year.

"The cabinet that you will vote for today will take us to NATO," Markovic told parliament. "Full membership will provide the level of security we haven't had in the past."

Between Russia and NATO

The approval of the new government comes amid political tensions following allegations of a foiled election day coup and assassination attempt against Djukanovic, who is expected to continue to wield some power as the head of DPS.

Prosecutors have accused pro-Russia elements of being behind the alleged plot, for which a group of Serbs were arrested. Officials have failed to produce any weapons that were to be used in the alleged plot, casting doubt on the claim. The Democratic Front, the main opposition bloc, has called the election results bogus and coup allegations DPS propaganda.

The Democratic Front is against NATO and EU membership and wants closer relations with Russia and Serbia, with which Montenegro has close economic and historical ties. Russia opposes Montenegro's NATO membership and has denied any involvement in the alleged coup plot.

NATO Secretary General: ‘We are not in a Cold War’

There are also allegations that Russia has backed the opposition and protests against NATO, charges the Democratic Front denies.

The Democratic Front wants a referendum on NATO membership, but Markovic wants to push it through parliament without delay. The nation of some 620,000 people was formally invited to join NATO last year in what Russia called a "provocation." Montenegro will have to ratify membership once all 28 NATO countries do the same by spring 2017.

On Monday, Markovic said his government would "try to overcome misunderstandings in our relations with historic ally Russia." Moscow has close economic and investment ties to Montenegro and has threatened to cut joint projects if the country joins NATO.

Montenegro's NATO membership would cut Russia off from strategic access to the Adriatic Sea and all but surround its ally Serbia with alliance members. Bosnia and Macedonia also seek to join NATO.