The Twitter account of Spiegel editor-in-chief Klaus Brinkbäumer has been hacked and used to apologize for bad news published about Turkey. The magazine has published extensively on Turkey and its relations with Germany. 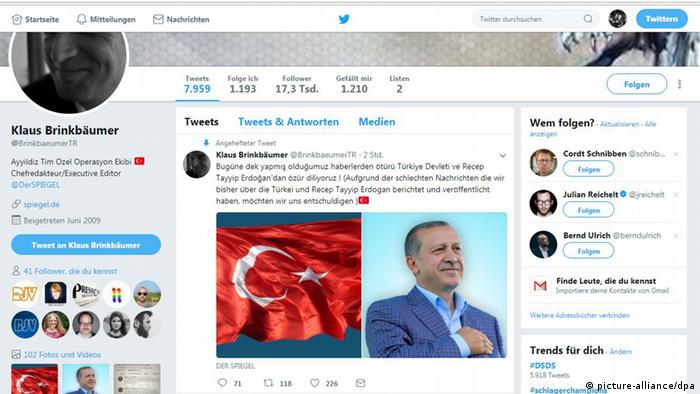 Hackers posted a picture of the Turkish president and flag alongside a message in Turkish and German: "We would like to apologize for the bad news that we have reported and published up till now about Turkey and [President] Recep Tayyip Erdogan."

Soon after, Spiegel issued a tweet of its own to explain what had happened, saying that Brinkbäumer's "most recent tweet about Erdogan and the header are not from him. We're taking care of it."

The pinned tweet was removed after about two hours. It was unclear who was behind the attack.

Spiegel has carried many articles on Turkey, in print and on both its German and English websites.

In September, it reported on an espionage trial in Hamburg which raised questions about the Turkish government's intelligence activities in Germany. "Ankara may even be trying to eliminate its political opponents," Spiegel noted at the time.

The news site has also reported on the case of Turkish-German journalist Deniz Yücel, who has been held in pre-trial detention in Turkey on terror charges since last February.

Berlin and Ankara are willing to overcome their differences "through dialogue," said Turkish Foreign Minister Mevlut Cavusoglu during a visit to Germany. He described his German colleague Sigmar Gabriel as a "friend." (06.01.2018)

Myanmar: Reporter placed in chokehold as 6 journalists charged 1h ago

US police uncover 'possible plot' to breach Capitol 7h ago