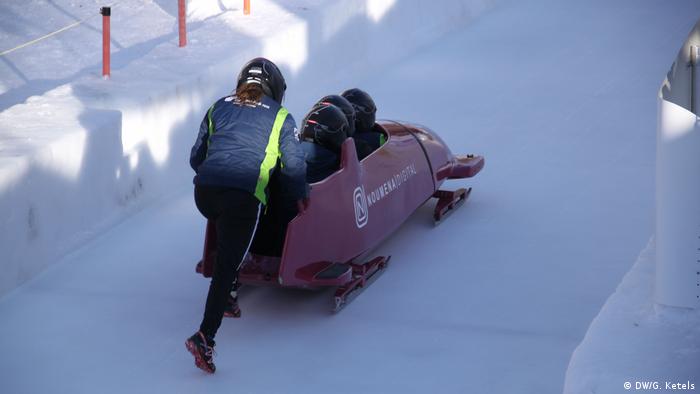 The cold flow of air in your face, the world roaring past in a speeding blur. Your heart races, your knees turn to jelly. Four to five times your normal body weight keeps you pinned in your seat, and you are hurled from left to right and back again in the tight corners as you descend the channel of ice at speeds of more than 130 kilometers an hour (80 miles per hour). A guest ride on the "Olympia Bob Run St. Moritz-Celerina" is 75 seconds of pure adrenalin, and an experience that you won’t forget in a hurry.

A rookie on the race track

DW reporter Hendrik Welling took on this adventure. For the series "Europe to the Maxx" in DW's "Euromaxx" magazine, he raced down the ice track together with experienced bobsledders. If you want to know whether this experience left him cold, watch the video. Traveling to St. Moritz and the Engadine Valley, he also set out to explore the history of the sport.

The beginnings of bobsledding

It was in fact here, in the Swiss Alps, where the bobsled was invented. In order to entertain a couple of bored Englishmen on their winter holiday, at the end of the 19th century a resourceful hotelier had two sledges welded together. The first ice run was built between St. Moritz and the nearby town of Celerina in 1904, so the crazy tourists wouldn't have to toboggan on the streets. And so the tradition began. The Bob Museum Celerina near St. Moritz shows the early beginnings of the sports

To this day the course is remade in the same place every year. The track builders begin their work after the first snowfall, then build the new bob run over a period of three weeks using diggers and spades. This makes it not only the oldest run in the world but also the only one that is made solely of ice and snow — without a concrete foundation. The 1,700-meter-long (5577 ft.) track is built out of around 15,000 cubic meters of snow and 10 million liters of water. 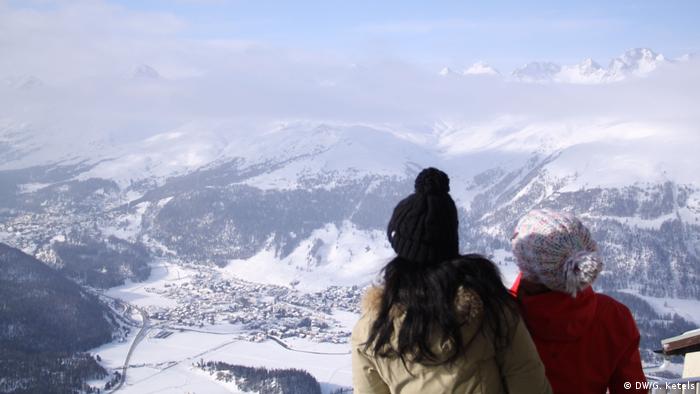 St. Moritz is located in the Engadin valley and is one of the most popular winter sports resorts in Europe

A touch of the Olympics for everyone

Plenty of World Cup champions and Olympians have whooshed down the famous ice run over the decades — and thanks to the guest rides also plenty of amateurs like our DW reporter. But not to worry: If you want to try your hand at amateur bobsledding, you won't be left to your fate on the track. That would just be too risky given the high speeds. The rapid adventure is embarked upon in the four-man bob, passengers protected between pilot and brakeman, to ensure that every tourist reaches the bottom in one piece. You don't need to have any prior experience — but you will need a decent portion of derring-do!

Price guest ride: 269 CHF
Special tip: In the nearby Bob Museum you can find out about the history of the sport and the bob run. Giassa da Scoula 6, 7505 Celerina.

Europe at its most extreme: the series "Europe to the Maxx" on DW's lifestyle and culture magazine "Euromaxx" makes Europe's superlatives experienceable — from extraordinary architecture to spectacular landscapes to unique cultural phenomena. Accompanying the series, the book "111 extreme places in Europe that you shouldn't miss" was published in cooperation withEmons Verlag. An alternative travel guide, both informative and entertaining. For avid travelers, fans of Europe and anyone who likes to show off with unusual pub quiz trivia. Full of guaranteed record breakers!